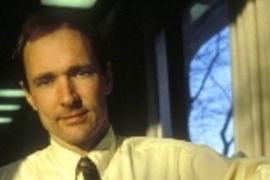 Now called Sir Timothy Berners-Lee, the 49-year-old British citizen lives in the United States and works at the Massachusetts Institute of Technology, where he is a senior research scientist. He was knighted in recognition of his "services to the global development of the Internet" through his invention of the World Wide Web, a system to organize, link, and browse Internet pages.

He coined the name and wrote the first World Wide Web server and the first client program--a browser and editor--in October 1990. He wrote the first version of the document formatting language with the capability for hypertext links, known as HTML (HyperText Markup Language). His initial specifications for URIs, HTTP, and HTML were refined and discussed in larger circles as web technology spread.

During the hour-long ceremony held in the ballroom at Buckingham Palace, Queen Elizabeth dubbed Sir Timothy Berners-Lee Knight Commander, using the sword that belonged to her father, King George VI. He was previously honored in 2002 at Buckingham Palace by Prince Philip, Duke of Edinburgh, who awarded him the Albert Medal of the Royal Society of the Arts.

"I am humbled by this great honor," stated Berners-Lee. "The web came about through an ongoing collaboration with my fellow inventors and developers worldwide. Everyone in the Internet community should be recognized by this honor.

"The web must remain a universal medium, open to all and not biasing the information it conveys. As the technology becomes ever more powerful and available, using more kinds of devices, I hope we learn how to use it as a medium for working together, and resolving misunderstandings on every scale," he said.

His commitment to universal access and open standards for the web was a driving force behind his founding of the World Wide Web Consortium (W3C) in 1994 at MIT's Laboratory for Computer Science (LCS), together with support from the late Michael Dertouzos, then LCS director.

Today, the W3C is known as the international organization that establishes technical standards for web infrastructure and applications. W3C has nearly 400 member organizations worldwide with technical teams at MIT's Computer Science and Artificial Intelligence Laboratory in the U.S., the European Research Consortium for Informatics and Mathematics in France, and Keio University in Japan.

The goal of W3C and its members is to lead the web to its full potential by developing standard technologies (specifications, guidelines, software and tools) that will create a forum for information, commerce, inspiration, independent thought and collective understanding.

While working at the European Particle Physics Laboratory in Geneva in 1980, Berners-Lee wrote his own private program for storing information using the kind of random associations the brain makes. The "Enquire" program, which was never published, formed the conceptual basis for his future development of the web.

Subsequently he proposed a global hypertext project and by December 1990, the program "WorldWideWeb" became the first successful demonstration of web clients and servers working over the Internet. All of his code was made available for free on the Internet at large in the summer of 1991.

A London native, Berners-Lee graduated with a degree in physics from Queen's College at Oxford University, England in 1976. While there he built his first computer with a soldering iron, TTL gates, an M6800 processor and an old television.

Cited by Time magazine as one of the 100 greatest minds of the 20th century, Berners-Lee is a Distinguished Fellow of the British Computer Society, an Honorary Fellow of the Institution of Electrical Engineers, and a member of the American Academy of Arts and Sciences. He received a MacArthur Fellowship in 1998, was named a Fellow of the Royal Society in 2001, and received the Japan Prize in 2002.

In June 2004, he received the inaugural Millennium Technology Prize in Helsinki, bestowed by the Finnish Technology Award Foundation as an international acknowledgement for "an outstanding innovation that directly promotes people's quality of life, is based on humane values, and encourages sustainable economic development."