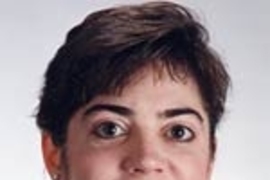 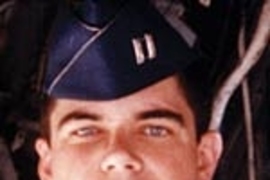 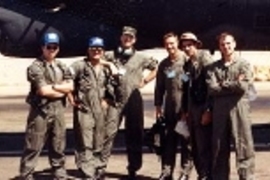 ↓ Download Image
Caption: William John Hecht Jr., center, a captain in the U.S. Air Force during the Gulf War, poses with crew in front of their B-52 bomber.

Caption:
William John Hecht Jr., center, a captain in the U.S. Air Force during the Gulf War, poses with crew in front of their B-52 bomber.

The years dissolve when parents discuss their children going to war. For MIT's William J. Hecht, Robert J. Fitzgerald and Glenn P. Strehle--all fathers of Operation Desert Storm veterans--the details are as vivid and dreadful as they were 12 years ago when air attacks on Baghdad began.

"It was a terrible, crazy-making time," recalled Hecht, executive vice president and CEO of the Alumni Association. Two of Hecht's three children served in Desert Storm, which lasted from Jan. 17 through Feb. 28, 1991.

Hecht's son, William John Hecht Jr., was a captain in the U.S. Air Force and his daughter, Olivia Ann Hecht (M.B.A. 1995), was an Army lieutenant and chief of medical logistics for the 1st Armored Division. Both have returned to civilian life in New England.

Recalling his children's wartime experience, Hecht said, "I obsessed. I was sane enough to know I was doing it. But I watched CNN every day. I started at 4 a.m., came to work, then went home and watched till midnight. I had this terrible feeling. I didn't want to admit I could have two dead children. I believed I could help by getting constant information."

Hecht (S.B. 1961, S.M.) participated in ROTC while he was a student but did not see active military service. His son, with whom he shares an enthusiasm for flying, attended the University of Massachusetts at Lowell for its Air Force ROTC program and flew 22 combat missions during his 60-day tour.

"He was the man who dropped the bombs," said Hecht the father. At one point, "when a B-52 went down over there, it was stark terror for us."

The downed plane was not young Hecht's. His sister found that out by driving across the desert. "She called home via satellite," Hecht said, his relief still evident. He and his wife heard from their daughter often by phone, but their son, stationed at Diego Garcia near India, was frequently out of communication.

Concern for his children's lives wore down Hecht's characteristic enthusiasm for his job, he said. "People noticed I was distracted. I actually put out a memo saying, 'My kids are in a war and I'm kind of worried about them,'" he recalled.

Hecht and Fitzgerald, a senior office assistant in the Controller's Accounting Office, attended a support group organized by MIT Medical for parents of Desert Storm combatants. The weekly meetings were led by social workers Dawn Metcalf and Jackie Buck.

"It was really, really helpful to meet with others in the same situation. It was also helpful to hear from veterans of other wars. They were able to give a sense of how bad it really is out there and to be reassuring as well," Hecht said.

Thomas R. Henneberry, assistant director for industrial agreements in the Office of Sponsored Programs, participated in the support group as well. A West Point graduate and a veteran of the Vietnam War, Henneberry shared his experiences to "provide some perspective on what their children might be facing," he said.

Fitzgerald's son, Stephen R. Fitzgerald, a staff sergeant in the Marine Corps 2nd Division, took part in the 1991 attack on the Iraqi Army in Kuwait and in retaking the Kuwaiti Airport. He was in Saudi Arabia and Kuwait for five months, his father recalled.

"It was great to have meetings to discuss our relatives who were involved and it was a very supportive group for everyone involved," Robert Fitzgerald said. "I would definitely be involved if there were to be another support group, as this situation will be even more dangerous than the Desert Storm war."

Strehle's son John was an ensign on the aircraft carrier Dwight D. Eisenhower when Iraq attacked Kuwait in August 1990 at the outset of Operation Desert Shield.

"The ship was in the Red Sea and it was a near-combat situation with airplanes from his ship flying up to the border of Iraq and Kuwait and then turning away as Iraqi planes came near them. There was obviously the possibility of a military attack on his ship," said Strehle, advisor on external relations for the Center for Advanced Educational Services and MIT treasurer emeritus.

Strehle (S.B. 1958, S.M.) added, "When you read a book about a past war, you can read the last pages first and find out what eventually happened. When you are actually in a war, the days only come one after another and you don't know what will happen next."

Like Hecht, Strehle and his wife were always "up to date on news from the Middle East and the status of the U.S. buildup of forces there. I can remember waking up in the morning and not getting out of bed until we listened to the news. Should the doorbell ring when no one was expected, we got a sudden thought of whether it might be a military officer with bad news."

Strehle's son returned to the United States before the ground war began in January 1991.

All three parents agreed that their experience as fathers with children in combat would have been far more painful without the active support of friends, peers and veterans of other wars.

Hecht emphasized the role of veterans in easing the anxiety of imagining his children in Desert Storm.

"I was on the road when the war started. A World War II veteran and MIT staffer, Bob Hagopian, called my wife and said, 'I understand.' Veterans like him were able to give us a sense of what it was like," Hecht said.

Hagopian, senior advisor to the vice president in Resource Development, served in the U.S. Army 78th Infantry Division in Europe from December 1944 to May 1946. He was reported missing in action for three days during the Battle of the Bulge.

"Twenty thousand Americans died in that battle. I knew what my family went through when they got that telegram. I could empathize with my friends' worries," said Hagopian (S.B. 1947).

Hecht offered this advice to parents of servicemen and women heading for Iraq: "Get all the help you can get. Talk a lot. Seek out war veterans. Their experience provides a special kind of support. It's awful. But most people do come home."