Toy Symphony to have U.S. premiere April 26 at MIT 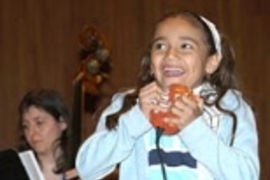 ↓ Download Image
Caption: Above, Sofia Molina of Jamaica Plain squeezes her Music Shaper as Pascale Delache-Feldman of the Boston Modern Orchestra Project accompanies her on bass during a rehearsal at Kresge Auditorium
Credits: Photo / Donna Coveney 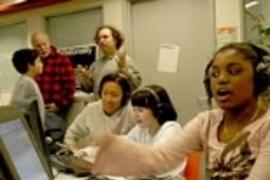 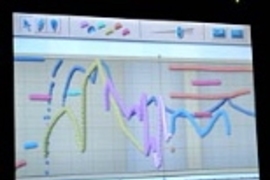 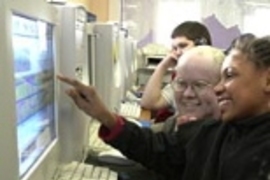 Caption:
Above, Sofia Molina of Jamaica Plain squeezes her Music Shaper as Pascale Delache-Feldman of the Boston Modern Orchestra Project accompanies her on bass during a rehearsal at Kresge Auditorium
Credits:
Photo / Donna Coveney

The U.S. premiere of Professor Tod Machover's Toy Symphony will be performed on Saturday, April 26, in Kresge Auditorium at 7 p.m., preceded by a rare opportunity to try out Machover's unique hyperinstruments in an open house starting at 5:30 p.m. in the Kresge lobby.

Toy Symphony, created by musician-composer Machover and his team at the MIT Media Lab, unites children, high-tech musical toys, and professional musicians in a collaborative composing process that culminates in a full-scale symphony performed by all the participants.

The Toy Symphony premiere will be performed by the Boston Modern Orchestra Project, conducted by Gil Rose; rising violin star Cora Venus Lunny from Ireland as soloist; and 24 children in grades two through eight as singers and performers on Machover's unique handheld "hyperinstruments."

The children performing in Toy Symphony are members of the Performing Artists at Lincoln School (PALS) Brookline chorus and of Boston area Boys and Girls Clubs. They began working in January with Machover's instruments, the "toys" in Toy Symphony. But the plastic beetle-shaped Beatbugs and the soft grapefruit-sized Music Shapers do far more than provide light-hearted visual and tactile appeal; they also provide children a chance to immerse themselves in complex listening, composing and performing together.

"Putting the joys of music and of music-making together is what's behind the hyperinstrument idea," Machover said about Beatbugs and Music Shapers. Working wonders with hyperinstruments requires no previous musical training, only concentration and delight. The "hyper" means these toys are plugged into a hidden computer and programmed to communicate with one another playfully across distances, like tiny dolphins.

At one rehearsal, the hyperinstruments produced unusual directions to the children about improving their performance.

Not all hyperinstruments have the cute eggy forms that children will squeeze for Toy Symphony. Machover has also designed hyperinstruments for the world's most prestigious musicians, including Yo-Yo Ma, for whom a hypercello was created.

The Saturday night concert will feature Lunny playing a hyperviolin, more slender and delicate than the usual one, and with the telltale cable trailing back to a hidden computer like an artery. It sounds like a violin, only more so, with surprisingly emotional overtones.

Jody Simpson, director of the PALS chorus, described "Toy Symphony" as one of the "best musical experiences" she has had.

"The children are engaged every second of the piece," Simpson said.

Producing Toy Symphony involved more than rehearsing for Saturday night's premiere. Machover is committed to bringing the "humanity and spontaneity" of music to children--to anyone, really--for whom the traditional ideal of technical expertise has been inaccessible or daunting. So Machover's students and research associates at the Media Lab also worked with Boston-area children in after-school programs to share with them the joys of hyperinstruments.

Work with area children began in January, with workshops on Machover's instruments and on Hyperscore, a program that allows children to portray musical elements such as melodies and harmonies in pastel lines on a computer screen. Children also used the Hyperscore software to compose their own pieces, which will be played by BMOP musicians on Saturday.

Toy Symphony workshops were held in five branches of the Boston Boys and Girls Clubs and nine of the children participating in the premiere came to Kresge through the workshop programs.

Machover said his goal for working with children is to bring them the "delight of sound itself; the delight of gesture and physical engagement with music-making and the basic buzz of performing in a group."

The joy of performing together started months ago, too. Each Hyperscore workshop day ended with a concert that children performed for one another. More than 40 young students, guided by Machover's own students and research associates, participated in the composing groups.

Toy Symphony, a three-year project that began in 1999, has recently completed its critically acclaimed European tour, with performances in Glasgow, Dublin and Berlin featuring such music world luminaries as violinist Joshua Bell and conductor Kent Nagano. Every Toy Symphony includes the educational outreach Machover's team provided in Boston and Cambridge.

Toy Symphony is free and open to the public, but reservations are required. For information, please call 617-363-0396.

Toy Symphony opens in New York City on May 17.

Machover, a professor of media arts and sciences at the MIT Media Lab, composed previous operas including "VALIS," "Brain Opera," and "Resurrection."