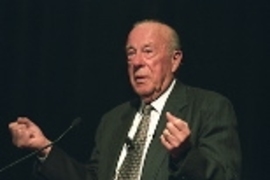 No stranger to the use of weapons and diplomacy, former Secretary of State George P. Shultz told an MIT audience last week that the U.S. must rely on both in its relations with Iraq and North Korea.

"As the Secretary of State, I was custodian of the Great Seal of the United States," said Shultz, describing the eagle with an olive branch in the talons of one foot and arrows in the other. "The eagle is looking at the olive branch, rather than the arrows, to show that the U.S. seeks peace. But it holds on to the arrows to show that the U.S. understands you have to be strong if you're going to be successful in seeking peace."

This "truth makes some people squirm," he said, "but America needs to be powerful enough that we won't be challenged."

Shultz, who earned the Ph.D. in industrial economics from MIT in 1949 and taught here from 1948-57, was on campus Wednesday, April 9 to accept the Robert A. Muh Award for noteworthy achievement in the humanities, arts and social sciences. His talk, titled "Reflections," was part of the ceremony.

"Don't forget the immense promise in the world today," Shultz told the audience packed into Bartos Theater. "There are better prospects for the world than ever before. And as a country, we need to do things that are broadly beneficial to the world. We should position ourselves in saying, 'We can't allow the terrorists to take this opportunity away from us.'"

Reflecting on his years with the Reagan administration, he said, "The fact of the matter is we did almost nothing about [terrorism]. We had a law enforcement approach: catch them and try the criminals. The reality is, that approach does not work. As President Bush says: 'The terrorists have been at war with us for 25 years or so. It's time for us to accept that we are at war with them.' We need to tell terrorists and the states that harbor terrorists that they are in the crosshairs.

"The use of force for preemptive action should be reserved for cases of extreme danger. But we can't have a sheriff's mentality. They stand in the street with their hand on their gun waiting for the outlaw to draw and hoping they can outdraw him. I don't think that's a situation we want to be in."

Shultz described North Korea as "a gigantic problem. A dictatorship with all sorts of unsavory things involved, and a drive to obtain weapons of mass destruction. This is a case where prevention has failed.

"We should try to do something bold and different. People are saying we should try to go back to the tense stalemate we had before. I say there is no way to do that because North Korea is an inherently unstable regime. It's a society and economy in unstable shape: more than 2 million people have starved to death there in the past three or four years. The regime cannot survive.

"Our objective should be to produce a unified Korean peninsula. We should get the Chinese, South Korea, Russia and Japan involved in diplomacy. Perhaps we should provide a way out for Kim Jong-il, give him a cushy life somewhere in Russia or China," said Shultz.

When asked by an audience member what the U.S. should do to rebuild relations with its European allies, Shultz responded: "Perhaps the question should be asked this way: What should they be doing to rebuild their relations with us?"

In response to a question about the United States' trade deficit, Shultz said, "The main economic problem in this country is that we don't save enough. We need to get back to the days when we could finance our own investment with our own savings. But we have to be gentle about changing this because the world is dining out on our trade deficit."

Shultz is now the Thomas W. and Susan B. Ford Distinguished Fellow at the Hoover Institution at Stanford University. He is the second person to receive the Robert A. Muh Award; dancer and choreographer Gus Solomons (B.Arch. 1961) received the first in 2000.

Robert A. Muh (S.B. 1959 in management), a life member of the MIT Corporation and longtime chair of the Humanities Visiting Committee, endowed the award, which was first announced in October 2000 at the 50th anniversary celebration of the School of Humanities, Arts and Social Sciences.

A version of this article appeared in MIT Tech Talk on April 16, 2003.