Broadcasting the Bard in bits and bytes 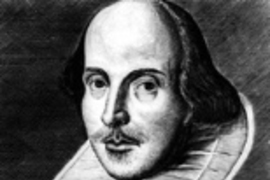 This is the first in a series of articles on educational initiatives that bring technological innovation into the classroom.

Shakespeare set the stage for a high-tech revolution in an MIT curriculum--an irony not lost on Peter Donaldson, principal investigator on the Shakespeare new media projects.

"I never thought I could be principal investigator on a technical project," said Professor Donaldson, a Shakespeare scholar and head of MIT's literature section.

With the completion of the Shakespeare Electronic Archives in 1998, Donaldson pulled together source materials in different media from several remote libraries on one web site so that students studying "Hamlet" could understand the play on a deeper level.

"In the past, a radical oversimplification of Shakespeare took place. We're trying to get away from saying, 'This is what his work means,' and replace that with a variety of interpretations in different cultures across media," he said. "Cultural understanding is rarely based on a single perspective."

Rather than simply reading Shakespeare's words on a page, students can refer to different versions of the text, as well as production notes, photos and drawings from several performances.

The folios are an "official" version of the written plays published in 1623, seven years after Shakespeare's death. The quartos were texts of individual plays that were published earlier. It's often not clear whether the folio or the quarto version was actually written first, or in some cases if a given version was written by Shakespeare at all. For instance, the well-known "Hamlet" line: "To be or not to be? That is the question" is written as "To be or not to be--Aye, that is the point" in the quarto.

"Is the change in the folio a corruption in the text or the author's second thoughts?" said Donaldson. "If this text is only in a rare book library, it's difficult to say to a student, 'You need to look at the original folios and quartos and compare texts.'"

The Shakespeare Project has 1,500 images from "Hamlet" correlated with lines from the play, 95 of those from line 3372 ("Alas, poor Yorick; I knew him, Horatio") in the scene when Hamlet picks up the skull and muses on death.

"You can spend 10 minutes with this web site and learn that some productions and actors interpret the scene as a cosmic question--Hamlet's meditation on death--and some focus on the social aspect--Hamlet looking at memories of death with his friends," said Donaldson.

Most of the materials come from the Folger Shakespeare Library in Washington, D.C. The project was funded by the National Endowment for the Humanities and the Andrew W. Mellon Foundation.

Donaldson also has made a similar site available to high school teachers and students studying the play. "Hamlet on the Ramparts" (http://shea.mit.edu/ramparts), designed and maintained by the MIT Shakespeare Project in collaboration with the Folger Shakespeare Library and other institutions, provides free access to an evolving collection of texts, images and film relevant to Hamlet's first encounter with the Ghost (Act 1, Scenes 4 and 5). This was funded by the National Endowment for the Humanities.

But Donaldson, whose primary research interest is Shakespeare in film, was itching to take technology a step or two further in the classroom. He envisioned a way to incorporate film into a study of the text.

"I knew it was possible from Media Lab projects I've seen," said Donaldson, who said he was "casting about for how to do it--obsessed with it, really," when he bumped into an old friend, a former literature major who was working in education technology for Athena. "That was a lucky break, finding someone who was already in that mixed world of humanities and technology," he said.

When Project iCampus grants became available, Donaldson jumped on the opportunity to get started with his Shakespeare DVD project, called the iCampus Shakespeare Video Annotation Project.

The DVD project allows the student to create what Donaldson calls "a video-enriched conversation" that moves back and forth between the text of a play and the performance of that play in film. In effect, the students are now composing multimedia essays as a replacement for the term paper.

Donaldson's first iCampus grant funded a collaborative project with Microsoft. "We wrote specs, they made a prototype," said Donaldson. The second version was built at MIT "from the ground up" using the software team of Belinda Yung (Class of 1998) as technical manager; William Blackwell (S.B. 2002) as head programmer; and UROPs including Jose Rivera, a senior in electrical engineering and computer science.

The next step is to improve the interface to get away from the "workroom feel" of the presentations and put them online for remote use in tutorials with students at other universities. iCampus has funded the project.

"For us, the Microsoft partnership has worked out extremely well," said Donaldson. "We've had the humanist learning about software and graphic design, and the technical people learning about the humanities.

"The good thing about MIT is that humanities faculty who have a vision can go to someone who can put together a team that can embody their project."

A version of this article appeared in MIT Tech Talk on May 7, 2003.