Artist-in-residence finds his muse in a clanging oven rack 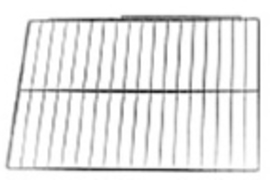 Advance billing for George Hart's artist-in-residency referred to the MIT alumnus as a sculptor, scholar, engineer, educator, computer scientist and mathematical magician. But nobody told us he'd be funny, too.

Exhibiting his work as well as his humor, Hart showed a slide of "I'd Like to Make One Thing Perfectly Clear," an 18-inch acrylic plastic sculpture made in his home workshop. Acrylic is easy to work with, he said. "When your wife isn't home, you put it in the oven at about 350 degrees for about six minutes," he told the audience packed into Room 6-120 on Thursday evening, Oct. 30.

Clearly, a lot of Hart's more important creative work goes on in the kitchen. For instance, he described the inspiration for "Music of the Sphere," a musical sculpture ("icosahedral ball") you hang around your neck.

When he was still a student, Hart attached two ends of a wire to his oven rack (a safe practice "only when it's cool," he warned), slipped the wire onto his head so it touched his ears, and swung his head slowly from side to side to hear the clings and clangs of the rack hitting normal kitchen objects: the stove, the table, a chair, a spatula. "The sound conducts directly into your head through your skull, and it sounds like you are inside some kind of gigantic vibrating metal cathedral," says Hart on his web site.

Years later Hart found a reference to a similar home experiment in an old reference book "The Young Man's Book of Knowledge," published in 1849. "That's when I realized it has a long tradition in the art world," he said.

A photo of his "Gonads of the Rich and Famous" sculpture--two white, intricately patterned spheres--appeared in a publication of the Mathematics Association of America without its title. "They refused to name that one," he said.

Also shown by Hart: "Tangled Reindeer," "Quintessence of Hedgehog," "The Plastic Tableware of Damocles" and "Disk Combobulation." All these are titles for polyhedron sculptures that, despite Hart's lighthearted nomenclature, possess an elegance and simplicity at odds with the elaborate mathematical work that goes into them. His work is mesmerizing because it's hard to take in. Just when you think you've got it, you see another facet of light or space or shape that throws you back to the beginning, but then you can't find the beginning. It's intellectual, but moving.

A version of this article appeared in MIT Tech Talk on November 19, 2003.