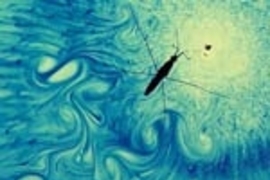 ↓ Download Image
Caption: A water strider passes over a layer of water that has been dyed blue and lit from below, illuminating the stopping vortices shed during the deceleration phase of the strider's motion.
Credits: Photo / John Bush, David Hu, Brian Chan 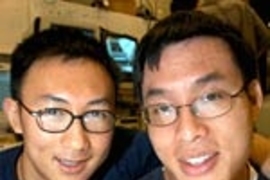 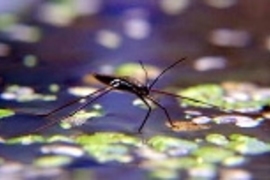 Caption:
A water strider passes over a layer of water that has been dyed blue and lit from below, illuminating the stopping vortices shed during the deceleration phase of the strider's motion.
Credits:
Photo / John Bush, David Hu, Brian Chan

CAMBRIDGE, Mass.--MIT researchers report in the Aug. 7 issue of Nature that they now understand how the insects known as water striders skim effortlessly across the surface of ponds and oceans.

In addition, the researchers created Robostrider, a mechanical water strider that uses the same fluid dynamics to move, although not as gracefully and quickly as its natural counterpart.

The hydrodynamics underlying the surface locomotion of these semiaquatic creatures (the family Gerridae and others) is poorly understood, said John W.M. Bush, associate professor of mathematics at MIT and author of the Nature study. In addition to water striders, he intends to apply his expertise in fluid dynamics to other surface swimmers.

Bush's water strider study solves a 1993 problem known as Denny's Paradox. It had been thought that water striders moved by creating waves that push them forward. Stanford University marine biologist Mark W. Denny pointed out that, theoretically, baby water striders could not swim because their legs weren't fast enough to create waves. But in fact, newly hatched water striders row across the surface just as well as adults.

As the insect rests on the surface, the tips of its thin legs create miniscule valleys. It sculls the middle set of its three pairs of legs like oars, causing the water behind those legs to propel it forward as the surface of the valley rebounds like a trampoline.

Hu and Chan gathered water striders in nets from Fresh Pond Reservoir in Cambridge and Walden Pond in Concord and brought them back to aquaria in MIT's Applied Mathematics Laboratory. Using particle tracking, dye studies and a high-speed video camera on loan from MIT's Edgerton Educational Center, they photographed the distinctive curlicue patterns made by the striders as they moved.

The striders are hatched under water but live on the surface. If they do happen to end up under water, it takes an enormous amount of force--akin to lifting 100 times their body weight--to climb out. There are hundreds of species of water striders, and as they increase in size, their legs must become proportionally longer for them to be viable water-walkers. The giant Vietnamese water strider, at 20 centimeters long, is the biggest such insect that is still able to walk on water.

The striders, which are found on ponds, rivers and the open ocean, can propel themselves to speeds of 150 cm per second. Their legs are covered with fine hairs that keep them afloat. They have two gaits: a glide that easily transports it one body length (1 cm) at a time, or a leap that propels it into the air and forward.

Chan designed and built a mechanical water strider. Robostrider is made out of a 7-Up can, stainless steel wire legs and an elastic band coupled to a pulley to power its middle legs. Light enough not to break through the water surface, it travels half a body length per stroke. Like its natural counterpart, Robostrider's principal means of transferring momentum is in the form of vortices shed by the rowing action.

Hu's doctoral thesis is on the propulsion mechanism of various surface swimmers, which all rely on manipulating the water surface to generate thrust. He is looking at Microvelia, a beetle that propels itself by ejecting surfactants; Mesovelia, a marsh insect that can climb menisci (bumps in the water surface), and the freshwater pond snail Physidae, which can propel itself on both hard surfaces and inverted beneath air-fluid interfaces.

Bush said that mathematics has not been applied broadly to this class of biological phenomena. "The physics and fluid dynamics of life at the interface remain poorly understood," he said. Continuing studies of water strider dynamics will be coupled with studies of birds, insects and fish in attempting to characterize the hydrodynamic forces acting on their bodies.

"This is a wide-open area," he said. "This subset of the biological world is dominated by surface tension, and has been largely neglected by fluid dynamicists."