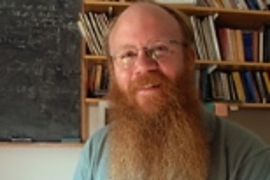 Lardil, an Aboriginal language once widely spoken on Mornington Island, Australia, is officially moribund. Yet when Norvin Richards, Mitsui Career Development Professor of Linguistics, speaks Lardil into a telephone, it bubbles over the distance like water bouncing downhill over stones, very much alive.

"It's a richly inflected language with few speakers left. Only one man is fully fluent now; in his 90s, he was born before white people came. The few others are in their 60s; they speak a new version. Lardil was deliberately destroyed," Richards said.

During a two-month stay on Mornington Island (off the northwest coast of Queensland and populated mostly by Aborigines), Richards plans to help compile educational materials in Lardil for use in the local school and to set up a master-apprentice program in which elders who are native speakers of Lardil tutor young people.

"Nowadays, all that most people know of Lardil is a few insults. Little kids come up to me and say, 'Talk language!'" said Richards, who describes himself as fluent in English, German, Tagalog and Japanese and as "nonfluent" in Italian and Lardil.

But Richards' goal is more than speaking Lardil himself. It is in hopes of maintaining the language and culture that he will return to Mornington Island with the results of his 2002 trip there--a book of traditional stories written in both Lardil and English, accompanied by CD recordings of those stories in Lardil. The sound recordings are taken from collections made in the past by Richards, other linguists and the late MIT Professor Kenneth Hale.

Hale, who was Richards' mentor and teacher at MIT, inspired him to pursue work with the Lardil. Fluent in more than 50 languages, Hale went to Mornington Island in 1960 and 1967, compiling extensive notes on Lardil, which was still spoken by many adults there. Accompanied by Richards and others, Hale returned in 1996 to complete a dictionary of Lardil and found the number of fluent speakers had shrunk dramatically, with the youngest in their 50s. Hale died in 2001.

In 1997, Richards turned his attention to the linguistic differences between Old Lardil, the language Hale had heard and studied, and New Lardil, whose grammar had evolved radically over 30 years.

He described these changes in a 1997 paper titled "Leerdil Yuujmen bana Yanangarr (Old and New Lardil)." In it, he weighs the causes of Lardil's demise, concluding that "scarcity of data available to children attempting to acquire Lardil" had taken a greater toll on the language than the growing use of English.

Richards works with the MIT Indigenous Language Initiative, a program to provide information and training to people seeking to revitalize endangered languages. He is involved locally with efforts by members of the Wampanoag Tribe to reclaim the Wampanoag language.

A version of this article appeared in MIT Tech Talk on October 22, 2003.