MIT to file brief in Supreme Court on U. Michigan affirmative action case 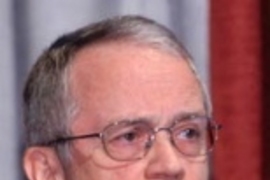 Using MIT's 29th annual breakfast honoring Dr. Martin Luther King, Jr. as a forum, MIT President Charles M. Vest announced today that the Massachusetts Institute of Technology will file with the U.S. Supreme Court an amicus curiae (friend of the court) brief in support of the University of Michigan's freedom to include race among factors for admissions.

Vowing to keep MIT in the forefront of the move to preserve race as a factor in admissions, Vest said, "MIT for decades has been a leader in building the diversity of our own community and of the engineering and science workforce and leadership of America. And it is not going to lose that edge on my watch."

Vest shared speaking honors at the breakfast with Julian Bond, Dr. King's student and friend, who continues his life-long civil rights advocacy as the present chairman of the National Association for the Advancement of Colored People.

Vest said he hoped the brief would "help persuade the Justices of the Supreme Court that for the good of America, our colleges and universities must retain the freedom to consider race as one of many factors when admitting students."

"In America," Vest said, "education is our primary vehicle of opportunity to develop human talent, to bring coherence to students' drive, and to convert their determination into accomplishment.

"In the next few months, the Rehnquist Court must decide whether that thread will remain whole, or whether in one snip of the judicial scissors they will sever it and let educational opportunity for many students of color crash back to the floor -- the floor from which it had been raised with such effort over many decades," Vest declared in an impassioned address to students and faculty in La Sala de Puerto Rico in the Stratton Student Center.

Should the Court strike down universities' freedom to consider race as one of many factors in selecting students, higher education will be unable to "contribute maximally to developing the nation's workforce, its scholars and the leaders of the next generation," said Vest, who has been MIT's president since 1990.

Vest, 61, devoted about a third of his 20-minute talk to his personal experiences. "My own journey," he said, "is one of direct and meaningful personal benefit from diversity."

"Our schools were desegregated in one fell swoop a year or so ahead of Brown v. Board of Education [1954]. I came quickly to value and learn from the new classmates who joined us. I remember when our high school football coach drilled us on how to protect our black teammates should they be attacked in some of the more rural towns in which we were to play.

"My first science teacher, who was a big inspiration, was black. My high school physics teacher was a woman. My closest friend in graduate school was from India. My PhD advisor was from Turkey. My closest colleagues as a young professor were from Taiwan, Hungary, and Turkey. My own father grew up in a German-speaking household.

"I know that I am richer, that my world-view is more balanced, and that my ability to do my job and live my life has been greatly enhanced by these and by so many more personal experiences that we can file under the heading of diversity," he said.

An ongoing inspiration for Vest is the MIT community itself, he said. "When I look around at an MIT student body whose undergraduates are 42 percent women, 6 percent African-American, 11 percent Hispanic American, 2 percent Native American, and present a huge range of diversity in so many other dimensions, it seems to me that a miracle has happened," he said.

"But that is just the point. It is not a miracle. It is not a natural occurrence. It is the result of determined, conscientious effort, over more than three decades, often against seemingly insurmountable odds. It is the result of institutional leadership and occasional courage. It is a result of the determination of innumerable families and communities. The goal was as simple as it was profound: to give every young person the opportunity to succeed.

"I can only conclude that despite the length of the journey, our nation is a better place than it was three decades ago."

Vest's talk ended on a note more determined than optimistic.

"Race still matters in America," he said. "We haven't reached the day when we will truly have a race-blind society. We hope we will, but we haven't. And we must not put our heads in the sand, declare victory and let 30 years of progress slide through our fingers."