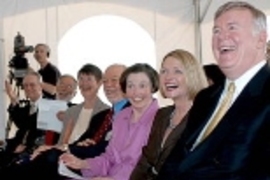 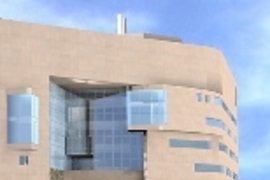 Making the world a better place by reducing misunderstandings that can lead to mistrust and global conflict is among the goals of Patrick J. McGovern Jr. and Lore Harp McGovern for the new MIT building that will bear their name.

Groundbreaking ceremonies for the McGovern Institute for Brain Research were held Monday in a tent near the intersection of Main and Albany streets. When completed in fall 2005, the building, which will house laboratory, office and teaching space, will span Main Street and the railroad tracks, creating a "new gateway from the north" for the MIT campus, said Robert J. Silbey, dean of the School of Science and one of the speakers at the ground breaking.

The McGovern Institute was established in February 2000 through a gift from International Data Group founder and chairman McGovern (S.B. 1959) and his wife, an entrepreneur in educational products. The gift is expected to total $350 million over the next 20 years, one of the largest university gifts in history.

The McGovern Institute investigates and seeks to understand the biological basis of the higher functions of the human brain. It conducts integrated research in neuroscience, molecular neurobiology, cognitive science, computation and related areas.

"This quest is the most difficult and important scientific challenge of this century," said President Charles M. Vest. "This is the right moment for this bold new initiative."

Mr. McGovern said he and his wife traveled to more than 100 countries and came away convinced that people around the world share the same goals, hopes and dreams, but that they also share a mistrust of their neighbors that leads to "terrible conflicts."

By the mid-1990s, the couple realized that tools to advance brain studies had taken a quantum leap forward. They began to look at seven institutions to choose a host for a facility to study the brain in an interdisciplinary fashion. MIT fit the bill.

"Our dream for the McGovern Institute is to make our world a better place," Lore McGovern said. "This neuroscience center will be next to none."

Institute Professor Phillip A. Sharp, a Nobel laureate and founding director of the McGovern Institute, said he expects advances in brain science in the coming decades to rival the landmark progress of genetics over the past 50 years. These advances will affect "what it means to be a human being, as well as potentially provide new ways to communicate, educate our children, and appreciate art and culture, including our capacity to learn and mentally function as we age," he said. "We are literally celebrating the future of science today."

The McGovern Institute will occupy a new 140,000-square-foot building within the brain and cognitive sciences project. The architectural design for the entire 376,000-square-foot project is a collaborative effort of Boston-based Goody, Clancy & Associates and Charles Correa Associates of Bombay, India.

In addition to the McGovern Institute, the project will house facilities for the Picower Center for Learning and Memory and the Department of Brain and Cognitive Sciences, holding up to 1,500 people. The three entities will surround a central atrium that will help facilitate communication among faculty and students.

Henrietta Davis, vice mayor of the City of Cambridge, said the new building, with its limestone facade and plate glass atrium, will help "keep the connections in the urban fabric."