From student grunge to haute couture 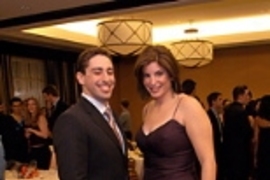 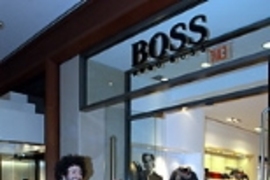 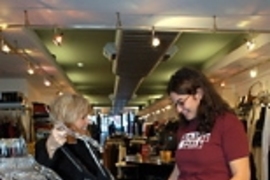 As the couple entered the room, they were met with screams of surprise and delight from friends who barely recognized them.

The reason: they had undergone a glittering transformation as subjects of "A Makeover Story," a show on The Learning Channel that's dedicated to "making America beautiful, two people at a time," according to associate producer Erin Sullivan.

The pair who walked into Alpha Phi's formal dance in November were Cameron Bass, a senior in mechanical engineering, and sophomore Rayna Zacks. He was smartly outfitted in a suit from Hugo Boss; she wore a silk organza dress from Betsy Jenney. At Grettacole in Boston, both had also had their hair cut and styled; Zacks had a facial makeover and Bass even got his eyebrows waxed.

It all started when Zacks applied to be on the show, which follows two people as they get dressed up and made up by local pros for a special occasion (in this case, the formal dance hosted by Zacks' sorority). "She applied and sort of dragged me into it," said Bass (a friend--the couple are not dating). The two days of shooting began on Nov. 13 for the "before" segment, when the TLC camera crew followed Zacks and Bass around MIT, "being goofy around campus like we normally do," he said.

"I wear hooded sweatshirts and big baggy PJ pants, and never wear makeup," Zacks said of her everyday style. "Cameron wears whatever is on his floor and isn't dirty. I was super-excited because I really wanted to do this, and I thought Cameron would be hilarious for it."

She was right. Before the stylists at Grettacole got their hands on him, Cameron had a bushy crop of hair which he realized would be severely trimmed, so he decided to have some fun. "I did things like hide twigs and a bird's nest in my hair," he said. "The salon lady didn't say anything; she probably thought I was really that dirty. It was my first time getting a haircut that cost more than $5."

The salon sessions were preceded by meticulous fittings at high-enddowntown clothing stores. "They were places I would normally get thrown out of," joked Bass.

"He achieved a dramatic transformation while remaining comfortable," said Nunzio Bellofatto of Hugo Boss, the menswear designer store in Boston that outfitted Bass. According to Bellofatto, Bass described himself as the type of guy who "buys a bag of clothes for $5 and wears what fits." When the process was over, he told Bellofatto, "I feel the inner businessman trying to get out."

The $1,700 outfit "cost a thousand times more than the last suit I bought. I was going to sell it on eBay but people talked me out of it," Bass said afterwards.

Zacks was dressed at Betsy Jenney on Newbury Street. "She was so animated, so up--she was my favorite 'patient' ever," said Jenney, the store's owner.

"It was really fun to get to try on clothes I would never have tried on otherwise," Zacks said. "We got to keep the clothes and shoes--I got pointy shoes! I loved my look, and have been keeping the hair part up. It was amazing what they did--they thinned out my hair so much and gave me awesome highlights. It was such a confidence-booster to get made up."

The pair was a big hit at the formal. "My friends were definitely shocked. I don't think they'd ever seen me made up like that," Zacks said.

It remains to be seen whether Bass will maintain his new style. After his haircut, "I looked like I was 16 years old," he said ruefully. "I was pretty used to having giant hair."

"A Makeover Story" currently airs twice each weekday on TLC. The episode with Zacks and Bass is scheduled for broadcast on Feb. 20 at noon.