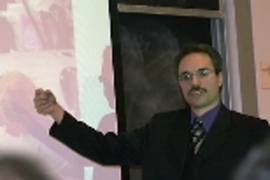 ↓ Download Image
Caption: Iraqi leaders' claim that they have gotten rid of all of their weapons of mass destruction would be "inconsistent with their previous behavior," U.N. weapons inspector Rocco Casagrande said.
Credits: Photo / Donna Coveney

Caption:
Iraqi leaders' claim that they have gotten rid of all of their weapons of mass destruction would be "inconsistent with their previous behavior," U.N. weapons inspector Rocco Casagrande said.
Credits:
Photo / Donna Coveney

Iraqi officials have opened doors of sites suspected of producing biological or chemical weapons to U.N. weapons inspectors, but proof positive that such weapons do not exist on Iraqi soil remains--and will likely remain--elusive.

Rocco Casagrande, chief of the Biological Analysis Lab for the U.N. Monitoring, Verification and Inspection Commision (UNMOVIC) from December 2002 to March 2003, provided an overview of the weapons inspection process and described his own experiences working in Iraq in a talk in Room E25-111 on Friday, March 14.

"In 1995, Iraq was the land of a million locks. In 2002, we had immediate access. But permission to get into sites is not the same as disarmament. Issues remain, such as: Where are several tons of missing growth media? Why doesn't the declaration of biological agents produced match Iraq's production capacity?" said Casagrande, who received the Ph.D. in biology from MIT in 2001.

Iraq pledged to get rid of its weapons following the 1991 Gulf War. Later it admitted to having a biological weapons program, resulting in the 1995 weapons inspections. These ended in 1998 and resumed in 2002.

Despite the slow pace and other frustrations, the inspectors provided a "benefit by their presence. It contains and inhibits Saddam's programs and it serves as deterrent to others who may be planning a biological weapons program," Casagrande said.

Casagrande used PowerPoint and color slides, a level tone and vivid analogies to bring to life his three months working among UNMOVIC scientists in and around Baghdad.

By analogy, the process is "like disproving the existence of unicorns. It's easy to do in this room. It's not so easy in California, where the trees hide everything and the Californians won't talk," he said.

On the likelihood that Iraq had destroyed its entire weapons-of-mass-destruction program, Casagrande said, "We need a robust paper trail. It's a decision inconsistent with their previous behavior."

Typically, an UNMOVIC inspection took between one and six hours, with tasks including interviews of facility supervisors and rigorous inventories of activities, equipment and reagents. Strategies for detecting weapons-of-mass-destruction activities ranged from sophisticated analyses of microscopic amounts of media to basic police work, such as "checking to see if the paper shredder was warm or the autoclaves had been used," Casagrande said.

Casagrande used Iraq's breweries to illustrate the challenges UNMOVIC teams faced, since the ingredients and processes used in beer-making could be utilized insidiously. A site could make "both beer and anthrax," he said.

"We looked for evidence that the site did what the Iraqis claimed: Did the brewery really make beer? If the equipment had a dual purpose, was it documented? Was the configuration of equipment consistent with beer-making? Most significantly, did the brewery or other site have the capacity to participate in a biological weapons program?" he said.

Among Casagrande's photographs from Iraq, his image of a cluster bomb brought a gasp from the audience.

Casagrande himself wrote reports of UNMOVIC findings, transmitting them daily to the United Nations Security Council in New York. He emphasized he had no connection to the U.N. now and did not represent its views in his MIT talk, sponsored by the Center for International Studies Starr Forum.