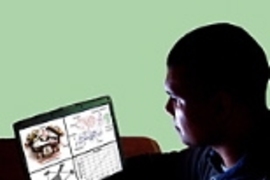 Assembling a machine sounds straightforward, but what if the components of that machine are nanoscopic? Similarly, bringing together the ends of two cables is simple unless those cables have a core diameter many times smaller than a human hair, as is the case with fiber optics.

Although there are devices on the market with similar credentials, they are expensive and have inherent limitations. Using a fundamentally new design, an MIT team has invented the HexFlex Nanomanipulator that's not only inexpensive but performs better in many ways than its competitors.

HexFlex, developed by MIT inventors led by Assistant Professor of Mechanical Engineering Martin Culpepper, has won a 2003 R&D 100 Award. The awards honor the 100 most technologically significant new products and processes, as determined by the editors of R&D magazine and more than 50 experts.

"A traditional nanomanipulator is the size of a bread box and costs more than a new SUV," Culpepper said. The MIT device is three to four inches tall by six inches in diameter "and could be manufactured for about $3,000."

The principal component of the HexFlex is a flat, six-pronged "star" of aluminum. Three of those prongs are mounted on an aluminum base. The other three are actually tabs that can be moved in six different directions thanks to a system of magnet-coil actuators. The device's name reflects that six-axis capability (hex) and compliant (flex) structure.

Manipulating the tabs changes the position of the "stage" at the center of the device. For example, pressing down on all three tabs causes the stage itself to move up. The device to be manipulated--whether the end of a fiber-optic cable or part of a nanomachine--is on the stage.

The HexFlex design is radically different from current nanomanipulators, which rely on "decades-old machine design paradigms," Culpepper said. For one, the star-shaped principal component of the HexFlex is monolithic (one piece) and thus requires no assembly. In addition, the HexFlex achieves motion through flexing of its structure, which is more precise than the motion of jointed components used in older paradigms.

Other nanomanipulators are actually small robots with several maneuvering joints. That makes them expensive to build (around $50,000). "Costs of alignment manipulators must be reduced, as they often contribute more than 50 percent of small-scale packaging cost," wrote Culpepper and Gordon Anderson (S.M. 2002) in a paper about the HexFlex to appear in the Journal of Precision Engineering.

Standard nanomanipulators have a working range of only 700 micrometers, or five times the diameter of a human hair. "If a manipulator is limited to such a small range, it's not as practical for emerging nanomanufacturing processes," said Culpepper. If a manufacturer wants to align additional objects on the same platform and they're outside the 700-micrometer range, "you'd have to add an additional nanomanipulator (and cost)," Culpepper said. "The HexFlex range is double that of state-of-the-art machines."

A second device in development by Culpepper and Shih-Chi Chen, a graduate student in mechanical engineering, could impact nanomanipulation in other ways. The MicroHexFlex, which is only one millimeter in diameter, is designed to reduce energy loss in fiber optic systems by providing improved alignment between components. "This is significant as a large portion of Earth's energy expenditures will be used in communications systems," Culpepper said. The MicroHexFlex could also be used in a lab-on-a-chip, manipulating particles or fluids.

The HexFlex was built and tested without any outside sponsorship. The MicroHexFlex was supported by Walsan-Lihwa. In addition, Chen recently received a Martin Fellowship through MIT's Laboratory for Energy and the Environment.

This is Culpepper's second R&D 100 Award. He won the first with Professor Alex Slocum and colleagues in 1999 for an invention that cuts costs and boosts the performance of engines.