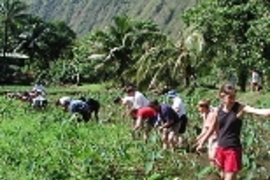 ↓ Download Image
Caption: MIT students weed a taro field at the farm of Kia Fronde (standing at left rear), who introduced them to native culture and agriculture as well as hydrology. 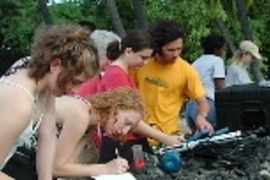 Caption:
MIT students weed a taro field at the farm of Kia Fronde (standing at left rear), who introduced them to native culture and agriculture as well as hydrology.

What do hydrology research and the cultivation of taro plants have in common? Both were part of an MIT expedition to Hawaii that mixed science with a liberal dose of native culture.

A team of 20 MIT researchers, including 15 undergraduates, traveled to the state in January for the fourth annual TREX (Traveling Research Environmental Xperience). The trip was organized and led by Sheila Frankel, assistant director of the Parsons Lab in the Department of Civil and Environmental Engineering. Another key participant: Professor Harry Hemond, director of the lab, whose skill as a commercial pilot came in handy.

In Hawaii the team collected data from land, sea and air in work that could have an impact on the state's management of fresh water. They also presented papers to state park officials and others on the herbicides used to control invasive species.

"Taking students into the field is a great way to get them excited about research and expose them to what field research is really like"--including setbacks, said Frankel. In Hawaii, for example, rough seas canceled deployment of one instrument for tracking current direction and speed.

In the hydrology research, the team joined forces with alumnus Kaeo Duarte (Ph.D. 2002), a native Hawaiian who is now a professor at the University of Hawaii. The goal is to calculate the amount and distribution of groundwater flowing into coastal waters. Groundwater is key to any island, as it's a major source of fresh water.

"If you know how much groundwater is flowing into the ocean, you can then estimate how much fresh water is available and develop strategies for sustainable management of groundwater use," Frankel said.

But while the state has models to gauge rough averages of groundwater flow, no one has ever determined the exact source and quantities of the groundwater coming into the ocean. If it works, the MIT technique could do so. Regardless, the data will contribute to Duarte's research into groundwater usage on the dry western coast of Hawaii's big island.

In one part of the work, the undergraduates, led by Frankel and Associate Professor Bettina Voelker, took salinity measurements in traditional fishponds and in adjoining coastal waters with instruments including GPS receivers and radios and the aid of kayaks and a motor boat. Areas of lower salinity would correspond to influxes of groundwater.

In the air above them were Frankel's husband, Donald (Ph.D. 1974), a chemical physicist, and Hemond. The two made overflights in a Cessna 172 with a FLIR (forward-looking infrared) camera to map temperature changes along the shore. They hope to prove that cold spots in the images indicate groundwater intrusions.

"The infrared images will be compared with the ground [salinity] measurements to see if it is possible to [correlate the two]," said Hemond, the Leonhard Professor of Civil and Environmental Engineering. If so, this would allow researchers to "conduct such studies over larger reaches of coastline from the air."

The team was also exposed firsthand to native culture, thanks in large part to Frankel's creativity. She volunteered everyone to weed invasive plants for the Kokee Resource Conservation Program in return for four days of free lodging at an original Civilian Conservation Corps camp in Kokee State Park on Kauai. The students also presented papers on herbicides to a rapt audience of Conservation Program volunteers and state park officials.

And then, of course, came the taro fields. After hiking an hour down a steep trail and through a shallow river, the team reached the farm of Kia Fronde in Waipio Valley, Hawaii ("I never would have done it if I'd known it would be that hard," said Frankel). Once there, they cultivated the fields, which involved a morning in the knee-deep mud in which the plants thrive. Their reward? A lesson in native hydrology from Kia and a feast that included French-fried taro chips.

The expedition was sponsored by the Northeast Educational Foundation, the Alumni Fund of MIT and Dean of Engineering educational funding.