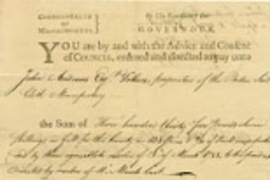 ↓ Download Image
Caption: One of the 22 bounty warrants returned from the MIT Museum to the Commonwealth of Massachusetts. This one is dated 1791 and is a receipt for sail cloth.

Caption:
One of the 22 bounty warrants returned from the MIT Museum to the Commonwealth of Massachusetts. This one is dated 1791 and is a receipt for sail cloth.

In late 2001, MIT Museum curator Kurt Hasselbalch came upon a cache of late 18th-century Massachusetts state documents--most of them emblazoned with the signature of John Hancock. The documents were in an envelope labeled "Property of the Secretary of the Commonwealth of Massachusetts, 1942."

Clearly, the museum was in possession of an old loan that had to be returned to its original owner, the Commonwealth of Massachusetts. The museum contacted the Massachusetts Archives about the documents and plans were initiated for their repatriation.

MIT Associate Provost for the Arts Alan Brody and Chancellor Phillip Clay presented the 22 bounty warrants dated 1786-96 to Secretary of the Commonwealth William F. Galvin at a special event at the museum on June 25. Galvin's agency includes the Massachusetts Archives, which will make the warrants available to researchers and historians.

Bounty warrants are essentially receipts for payment of state subsidies or rebates awarded for the production of certain commodities. The bounties represented on these warrants are for whale oil, cotton duck (for sails), hemp (for ship rigging) and sheet glass. The warrants--almost all signed by the governor, secretary of state and treasurer--are in effect receipts. Hancock, Massachusetts' first governor, validated 16 receipts as a Boston selectman.

Hasselbalch, curator of the Hart Nautical Collections, contacted colleagues at New Bedford Whaling Museum to inquire about their experience with such documents. They indicated that the documents appear not to have been studied by whaling researchers and constitute a new source for the economic history of whaling.

"These warrants might provide a more detailed view of the complex business relationships between whale oil merchants and brokers and insight into the subtle ways in which they tried to manipulate the markets or navigate domestic and international embargoes," said Michael A. Jehle, director of curatorial affairs at the New Bedford Whaling Museum.

The MIT Museum exhibited the original documents prior to Pearl Harbor. After the U.S. went to war, they apparently were filed in an archival box in a remote corner of the museum for more than 60 years

Hasselbalch discovered the envelope containing the documents while cataloging some old files in the Hart Collections. A typewritten notation, appearing to be an exhibit label, opened with the following words, "Documents of the late 18th century, showing aspects of the mercantile life in Massachusetts."

The exhibit label continued, "The bounty warrants indicate efforts made by the state government to revive the whaling industry after the Revolution, at a time when the British industry had profited by the war and soared ahead.

"These documents have been loaned to the Institute [MIT] by the office of the honorable Frederic W. Cook, Secretary of the Commonwealth, through the courtesy of Mr. Donald H. Fassett, Director of Corporation Records."

Because no records could be found relating to this loan, the curator and state archivist can only speculate about why the loan was made, the reasons the loan may have been forgotten, and how it made its way to an envelope buried in old files.

"Our presumption is that the documents were loaned in 1941 to the then Hart Nautical Museum to augment the inaugural exhibition of the Forbes Whaling Collection, which had been recently donated by Alan Forbes Sr. (president of State Street Bank)," said Hasselbalch. "After Pearl Harbor was attacked, MIT went into war emergency mode, the exhibit came down, the documents were filed away and the loan forgotten."