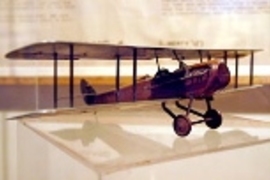 Caption:
A model of a DeHavilland 4 is included in the MIT Museum exhibit commemorating the 100th anniversary of human, powered flight.
Credits:
Photo / Donna Coveney

The first aeronautics engineering program in the United States was established at MIT in 1914 with a curriculum designed by Jerome C. Hunsaker (S.M. 1912, Sc.D.), who later designed the Cambridge campus' first structure, a wind tunnel, with Donald W. Douglas (S.B. 1914).

Hunsaker, who became one of MIT's most illustrious contributors to early aeronautics, designed the Curtis NC-4, which carried a Navy flight crew in the first trans-Atlantic flight in 1919. After training many MIT graduate students in aeronautics, Hunsaker was elected chairman of the National Advisory Committee for Aeronautics (NACA), NASA's predecessor, in 1940.

Douglas went on to found the Douglas Aircraft Co., which produced the first DC-3s, used in commerical service by American Airlines in 1936. The DC-3 was designed by another MIT alumnus, Arthur E. Raymond (S.M. 1921).

MIT President Richard Cockburn Maclaurin was one of 12 members of the first NACA established in 1915.

In 1929, the first undergraduate program in aeronautical engineering began at MIT. That same year, an alumnus, James H. Doolittle (S.M. 1924, Sc.D.) proved the feasibility of instrument-guided flying when he flew "blind," relying solely on instruments.

In 1932, Charles Stark Draper (S.B. 1926, S.M., Sc.D.) founded a small instrument lab at MIT, which later developed gyroscopic aircraft instruments, including artificial horizons, gyroscopic gunsights and inertial navigation. It was renamed the Instrumentation Laboratory in 1945 and researchers there developed the onboard inertial guidance navigation and control systems for the Apollo Space Program in the 1960s. In 1970, it became the Charles Stark Draper Laboratory.

MIT dedicated its seventh and most significant wind tunnel, the Wright Brothers variable-pressure wind tunnel, in 1938. It was used by the U.S. Army and Navy during World War II to train officers in aeronautics, and for sponsored research for government and industry.

At the end of World War II, MIT was recognized by the government for having played a major role in winning the war through the development of radar and gun sights, and the leadership of faculty and administrators in government research.

In 1947, the Gas Turbine Laboratory was established, quickly becoming a leading laboratory for fluid-mechanics research on aircraft engines.

In 1961, Professor Robert C. Seamans Jr. (S.M. 1942, Sc.D.) was deputy administrator of NASA, which superceded NACA, when President John F. Kennedy announced that the U.S. would send astronauts to the moon in the next decade. Kennedy based his announcement on a plan prepared by Seamans. In 1969, Seamans was named Secretary of the Air Force.

In addition to the contributions of the Instrumentation Lab in getting Apollo to the moon, MIT alumnus Buzz Aldrin (Sc.D. 1963) was one of the first two men to walk on the moon, with Neil Armstrong. The two men were the first to land on the moon, in Apollo 11 in 1969. Four of the 12 astronauts who walked on the moon's surface during the Apollo program were MIT graduates: Aldrin, Charles M. Duke (S.M. 1964), Edgar D. Mitchell (Sc.D. 1964) and David R. Scott (E.AA. 1962, S.M.).

Lichtenberg carried with him a one-square-inch piece of fabric from the Wright brother's "Flyer." That swatch is on display now in the MIT Museum's "Hub of the Air Universe: A Century of Flight in Massachusetts." The exhibition, which runs until July, features artifacts, artwork and images from the museum's collection.

In 1986, MIT's Building 37 was dedicated to Ronald E. McNair (Ph.D. 1977), a physicist and mission specialist who died in the Challenger accident. Professor Eugene E. Covert served on the Presidential Commission that investigated the accident.

And in 2000, alumnus William M. Shepherd (S.M., Oc.E. 1978) served as commander of the first crew to live aboard the International Space Station.