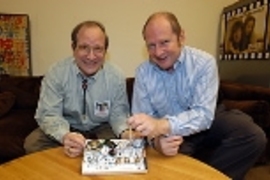 This is the third in a series of articles on educational initiatives that bring innovation into the classroom.

Today's equivalent is a Java app on a laptop.

"In electrical engineering, the students are not connected to the physical world any more. They are not ham radio operators; they have not taken apart their cars. As a result, there's a rather tenuous connection between the nice mathematical concepts and the practical applications in the real world," said Gerald Sussman, the Matsushita Professor of Electrical Engineering. "On the other hand, they're more sophisticated in some ways. They come in knowing how to program. So instead of teaching them to program, we teach them to solder."

Hal Abelson, the Class of 1922 Professor of Computer Science and Electrical Engineering, agreed. "The students come in without hands-on experience, which makes the curriculum harder and less real," he said.

The Abelson and Sussman mission: find a way to teach the core electrical engineering circuits course, 6.002 (Circuits and Electronics), that gives students hands-on experience without slackening the pace or diluting the concepts.

The answer: an experimental course, 6.002x, that follows the same schedule as 6.002 but substitutes a case-based tutorial for each recitation and calls on talented alumni and other successful engineers to teach two- to three-week tutorials. The course was made possible by a grant from the Alex and Brit d'Arbeloff Fund for Excellence in Education.

The result: "I think it was awesome. It's the first time I've ever known my professors," said freshman Amir Hirsch, who just completed the course. "And I know all the other students, too."

Abelson and Sussman decided to model 6.002x loosely on the Harvard Medical School curriculum, which brings in physicians as adjunct professors to help keep the student-teacher ratio low.

"If you want to make MIT education better, you have to create useful roles for alumni and other really outstanding professionals," said Abelson. "We've set this up with a few hours of lecture each week plus case-based tutorials with seven students to one faculty. How else do you sustain a 7:1 ratio?" Course 6.002x had 25 students, whereas 6.002 has roughly 10 times that many.

For the tutorial on "how the power in your house works," Scott Stordy, senior electrical engineer for Facilities, gave the students a tour of the MIT generator and explained its operation. For a tutorial on circuits, alumni and engineers from Teradyne and Analog Devices joined them. Another tutorial was on power converters; "How do you get 300 volts out of a 9-volt battery?" said Abelson.

Students also had the benefit of online tutorials, one of which featured circuits they could complete. Students could work together to learn the principles of circuits, but each student's circuit had different coefficients, requiring individual work. These tutorials provide immediate feedback so students don't have to wait to find out if they applied the principles correctly.

The labs in the course were very much real-world as well. In the final lab, students built their own transistor radios. Abelson and Northeastern University Professor Harriet Fell (S.B. 1964, Ph.D.) were lab partners. They proudly showed off their radio, which picked up a station just fine. "It took Hal and me about 25 hours to build--about average," said Fell, who is on sabbatical this year and began attending the class almost like a student. "I sat in on the first tutorial and I was hooked."

The d'Arbeloff grant will pay for additional curriculum development this summer, as Abelson and Sussman seek to perfect the course.

"Is it sustainable? We think so and we're going to try it again next spring with a class twice as large," said Abelson. "We're pretty encouraged by what we've seen so far."