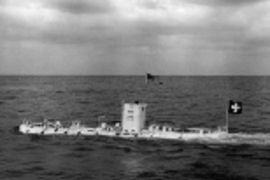 Caption:
The U.S. Navy bathyscaphe Trieste under tow, en route to a deep water dive in the Pacific on Sept. 15, 1959. Commander Walsh said the vessel flew both the American and Swiss flags to symbolize the joint venture.
Credits:
Photo / U.S. NAVAL HISTORICAL CENTER

Sounding like a true adventurer, Don Walsh, the Navy commander who piloted a U.S. submersible in its dive to the deepest spot in the ocean four decades ago, spoke at MIT Friday evening, March 14.

Almost immediately after being introduced, Walsh apologized for limping, explaining that he had bruised his leg while chasing Hooker's sea lions in Antarctica recently, during one of his 18 Antarctic expeditions on a Russian nuclear icebreaker. You could hear a collective chuckle escape from the audience as people realized that Walsh was the real McCoy, sort of an Indiana Jones of the sea with a near-perfect sense of comic timing.

"I am a senior citizen," he said, "but I don't usually limp this badly." Walsh, who wore slacks and a short-sleeve shirt with a zip-up fleece vest, didn't particularly look like a pioneer, but he sure sounded like one. Nowadays, he's working on a plan to sell seats to tourists who want to ride a submersible on a dive at the North Pole. The "real" North Pole is at the bottom of the sea, he said.

Even his interest in Hooker's sea lions seems a perfect fit. Like Walsh, the Hooker is an adventurer, it takes deeper dives than any other sea lion or seal.

Walsh piloted the Trieste on January 23, 1960, the day the bathyscaphe slowly dropped 35,800 feet--nearly seven miles--to softly touch the bottom of the ocean at Challenger Deep, the lowest spot in the ocean. (Challenger Deep is named after the British survey ship that measured it, just off the Marianas Islands in the Pacific Ocean near Guam.)

The trip down took four and a half hours. They traveled slowly so they wouldn't hit bottom with a crash. Walsh said they were expecting the dive to be 35,800 feet, but "finally found the bottom 2,000 feet deeper" at 37,800 feet. It wasn't until later he discovered the gauge used to take the original measurements had been calibrated for fresh water, explaining the 2,000-foot discrepancy.

Walsh, who has a Ph.D. in oceanography and an M.S. in political science, and the Swiss scientist Jacque Piccard stayed on the bottom just 20 minutes before beginning the three-hour trip to the surface by releasing iron-shot ballast from the submersible, which used tanks full of 22,500 gallons of gasoline for buoyancy. He showed a photo of the himself and Piccard inside the 17-cubic-foot cabin "about the size and temperature of the average household refrigerator," he said.
Both men ate chocolate during the eight-hour trip, Walsh said. Piccard preferred Nestle while Walsh munched on Hershey bars.

The talk in Room 66-110 was hosted by MIT's Deep Sea Archeology research group, led by Professor David Mindell of the Program in Science, Technology and Society.