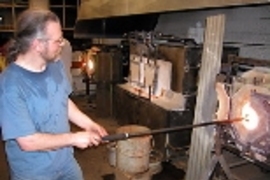 Martin Demaine went online when he learned that the director of the MacArthur Foundation Fellowships was on the line with his son, Erik.

"I wasn't really familiar with the award, coming from Canada. So we went through the list of previous winners," he said. "It was a group that makes mankind better through creative research. The winners push the limits of whatever their interests are. I'm very proud that my son has officially entered that group.

"It's a great reinforcement for him. A lot of the work he does doesn't get the same kind of recognition because it's very theoretical and abstract; it's not directly saving lives."

Martin, a 61-year-old artist/craftsman turned computer scientist, teams up with his son and other researchers at MIT on projects that connect art with mathematics.

As a visiting scientist, Martin produces algorithmic art (for instance, the proposed shadow wall described in the related article on page 1); he collaborates on folding problems in computational geometry ("Having a background in art helps me visualize. I can see things 3-D in my head," he said). He also solves problems in combinatorial game theory and recreational math--a study of games and puzzles--and gives tutorials in the MIT Glass Lab.

"This place is just filled with interesting, brilliant people at so many different levels of intensity," he said. "It's fun understanding how they work."

Martin and Erik have met and collaborated with many people over the years as the pair traveled around the country.

"I've always tried to be a distraction--showing him new things and seeing if he's interested in them," Martin said. "But he gets all the credit [for his success]. I mean, he is who he is and I'm just lucky to be around."