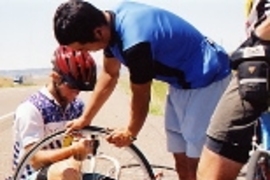 "Forty-five days, 3,300 miles, 25 flat tires and we are DONE! We have seen some of the best sunsets, braved harsh weather, dealt with isolation and dehydration and learned the importance of using sunscreen! I think Greg, Taku and I all now see the country in a whole new light and we have this ride to thank."

But the "trip was not about the bike ride, it was about fighting cancer," wrote junior Kyle Rattray in the last diary entry (July 25) of his cross-county bicyle trip this summer. With his fraternity brothers Greg Mahowald (S.M. 2003) and senior Taku Iida, Rattray biked from Boston to Seattle, concluding with an emotional celebration in his hometown of Sunnyside, Wash. The trio raised $18,000 for the American Cancer Society, including about $5,000 from 40 members of the MIT community.

"Every time my muscles hurt or I wanted to just pack up and quit altogether (and it did happen), I thought of the millions of cancer survivors out there and went on. I am blessed to have walked--or, as the case may be, ridden--away from the disease," he wrote.

"I would definitely do it again," said Rattray on his return to campus. "It was one of the best experiences of my life and I wouldn't change a thing--well, maybe I'd use some more sunscreen." He was treated at a hospital in Pierre, S.D., for second-degree burns on his back, the result of his attempt to eliminate ugly tan lines by riding shirtless for a day.

Rattray, who survived Wilm's tumor as a child, will spend next summer working in Spain for his hero, Lance Armstrong, a fellow bicyclist and cancer survivor. But for now, it's back to the books. Rattray majors in brain and cognitive sciences, Iida in mathematics. Mahowald started a new job after the trip, working for Northrup Grumman in Baltimore.

To learn more or make a donation, see /newsoffice/nr/2003/biketrip.