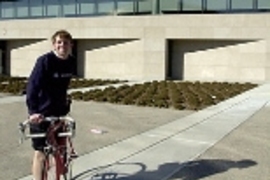 ↓ Download Image
Caption: Cancer survivor Kyle Rattray stands next to his bike outside the Zesiger Center. He and a friend will be riding their bikes from Boston to Seattle this summer to raise money for the American Cancer Society.
Credits: Photo / Donna Coveney

Caption:
Cancer survivor Kyle Rattray stands next to his bike outside the Zesiger Center. He and a friend will be riding their bikes from Boston to Seattle this summer to raise money for the American Cancer Society.
Credits:
Photo / Donna Coveney

He rode his tricycle in circles on the porch, round and round, faster and faster, until he fell off the tricycle over the edge of the porch and banged up his knee.

Kyle Rattray remembers the incident vividly because it was also the day he saw blood in his urine, and for years afterward, he thought installing guard rails on porches would prevent cancer.

"I was three and a half years old, a big boy, proud that I could go to the bathroom standing up," recalls Rattray, a 20-year-old sophomore in brain and cognitive sciences. "But later that day, I noticed something different in my urine. I called my mom. She looked at it and screamed."

The first diagnosis was a stomach ulcer, so he used Tums. But in a few days, his abdomen "grew to the size of a cantaloupe," he said. X-rays showed nothing, but the little boy developed a backache and grew lethargic. His parents soon made the trip from Sunnyside, Wash., to Seattle. There, at Children's Hospital, they discovered Kyle had third-stage Wilm's tumor in his right kidney.

"We were small-town farmers. To us, cancer was a death sentence," Rattray told a recent gathering of the organizers of MIT's Daffodil Days, the American Cancer Society (ACS) fund-raiser now taking place on campus.

Rattray had surgery to remove his kidney and chemotherapy to kill any remaining cancer cells. "I had no hair on my head; I had scars on my belly and tubes in my chest," he said. "And I was convinced that falling off the porch was what caused cancer. I was 10 before I discovered that no one knows where cancer comes from."

He calls himself a cancer survivor, but refuses to say he's cured. "The fact that I've had cancer before makes me more susceptible, statistically," said Rattray, who has had other problems with cancer since, including a growth removed from his colon. "Since I was sick, I connoted the word 'cure' with the disease being totally eradicated. For everyone. I like to reserve that word for when it can have more meaning."

Rattray, who has been involved with the ACS for 16 years, continued, "I'll bet there's no one in this room who hasn't been touched by cancer--yourself, a family member, a friend, a co-worker--somebody in your life has had cancer."

For 14 years, he and his family have organized the Relay for Life fund-raiser in Sunnyside--a town of 10,000 people with "322 days of sunshine a year," raising $150,000 in the year his friend Delores "Dee" Parsons died of cancer. "And my county is one of the poorest in the country," he said.

Rattray credits cancer with some good things in his life.

His family grows asparagus, apples and grapes. "During the harvest, you can smell grapes in the air. I want to go back every day," said Rattray, who plans to live in Seattle when he completes his education.

Rattray said his parents did more than drive four hours to Seattle for his treatments. They also began learning about cancer research and treatments, encouraging Rattray to do the same as soon as he was able. "Having cancer made me mature very quickly. It probably helped me cognitively," said Rattray, who does research in Professor David Housman's lab in the Center for Cancer Research.

In addition to speaking on behalf of the Daffodil Days fund-raiser, Rattray is planning a 3,500-mile bicycle ride from Boston to Seattle this summer, hoping to raise $10,000 with his Theta Chi fraternity brother Greg Mahowald, a graduate student in electrical engineering and computer science.

Mahowald and Rattray--who was heavily influenced by his friend Parsons, who died from cancer at age 57 while training to run the Boston Marathon, as well as cyclist Lance Armstrong--plan to ride 100 miles a day in June and July as they make their way cross country.

"Lance Armstrong has always been a hero of mine ever since reading his book, 'Its Not About the Bike,'" said Rattray. "After hearing about other people who did rides for AIDS locally, I thought, 'Why not follow Lance's lead and do a tour and follow the route that was so much fun two summers ago?'" when he drove across the country with friends.

They've raised $4,000 to date and are looking for additional money, as well as other types of support such as housing. The two hope to line up overnight accommodations along the route through friends and family of the MIT community.

"We are asking for flat donations, sponsors by mile or by day, or whatever other clever thing people want to donate by--number of blown tires, Powerbars eaten, etc.," said Rattray, who asks that people seeking more information contact him by e-mail at ratt@mit.edu or check out the trip web site at http://web.mit.edu/cancer/trip.htm.

The daffodil is considered a flower of hope.

In the United States, the Daffodil Days campaign began in 1970.

The campaign has raised $73,000 at MIT during the past five years.

To help out with Daffodil Days, order a $6 bouquet of daffodils this month; the flowers will be delivered March 19-21. Contact the MIT Women's League at 253-3656 or wleague@mit.edu to order daffodils or volunteer to help with deliveries.