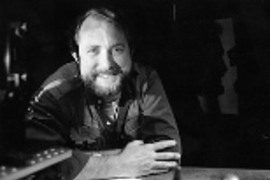 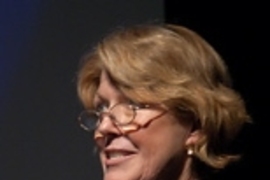 ↓ Download Image
Caption: Benton's widow, Jeanne Benton, speaks to an international gathering of scientists and Benton's friends and former students at a symposium to honor his life and work. The event, which had been planned for several weeks, took place at MIT on Nov. 11, two days after Benton's death.
Credits: Photo / L. Barry Hetherington

Caption:
Benton's widow, Jeanne Benton, speaks to an international gathering of scientists and Benton's friends and former students at a symposium to honor his life and work. The event, which had been planned for several weeks, took place at MIT on Nov. 11, two days after Benton's death.
Credits:
Photo / L. Barry Hetherington

Stephen A. Benton, inventor of the rainbow hologram and a pioneer in medical imaging and fine arts holography, died of brain cancer at Massachusetts General Hospital on Sunday, Nov. 9. He was 61. Benton was director of the MIT Center for Advanced Visual Studies (CAVS) and the E. Rudge ('48) and the Nancy Allen Professor of Media Arts and Sciences at the Media Laboratory.

President Charles M. Vest said, "Steve brought a joy and spirit of inventiveness to all that he did. He was a gifted teacher, scientist, engineer and artist who personified the best of MIT."

Benton was known for his enthusiasm for all things optical--an enthusiasm, he said, that was ignited the minute he put on a pair of plastic 3-D glasses to watch the film, "The House of Wax," at age 11.

"There was a realism and a sense of excitement like nothing I had ever felt before. Not only was I amazed; I determined then and there to figure out how it worked," Benton once said.

Benton was born in San Francisco in 1941 and grew up in Santa Barbara, Calif. He received his undergraduate degree from MIT in electrical engineering (1963) and worked with stroboscopy pioneer Professor Harold "Doc" Edgerton. During this time, Benton also worked at the Polaroid Corp., participating in Edwin Land's vision research laboratory. Benton received the M.S. (1964) and Ph.D. (1968) from Harvard University.

"Steve was not only a superb scientist who led his field for decades, he was also a wonderful practical craftsman of the holographic image, and a Pied Piper for students, artists and designers who worked with advanced imaging technology. His influence on the art and design worlds has been profound and enduring," said architecture professor William J. Mitchell, who is academic head of the Program in Media Arts and Sciences.

Benton had his first glimpse of a hologram in 1964. It was a "little coffee cup, but it was the most amazing thing I'd ever seen. I knew my life would never be the same," he said. Holography works like photography in that it records light wave patterns on chemically sensitive film or glass. Converging direct and indirect laser beams create its exciting 3-D effect.

Benton returned to MIT as a visiting scientist in the Laser Research Center in 1980. He became founding head of the Spatial Imaging Group in 1982. A founding faculty member of the Media Lab in 1984, Benton delighted in both the scientific and aesthetic applications of holography. He held 14 patents in optical physics, photography and holography, and his own works in holography have been displayed at the Museum of Holography in New York.

In 1985, Benton began generating synthetic holograms from 3-D digital databases, initially creating a 3-D image of a green car floating in front of the Boston skyline.

He described holography as a true "intersection of art, science and technology." While he considered viewing a good hologram to be a "magical experience," the rigor and depth of his research yielded far more than visual wizardry. Holograms have been used to create three-dimensional composites of CT and MRI scans that have been very useful in medical diagnosis.

"As a world leader in both technology and the arts, Steve Benton epitomized the Media Lab. Rather than mere users of holography, he and his lab invented many aspects of it, including the basic science behind holographic video," said Nicholas Negroponte, chairman of the MIT Media Labs and the Jerome Wiesner Professor of Media Technology.

Benton is survived by his wife, Jeanne Lamphier Benton; a daughter, Julia Benton; a son, James; and brothers Nicholas and Chris. He was a longtime resident of Lincoln, Mass. A funeral will be held Dec. 6 at 2 p.m. at St. Anne's-in-the-Fields Episcopal Church in Lincoln.

A version of this article appeared in MIT Tech Talk on November 19, 2003.