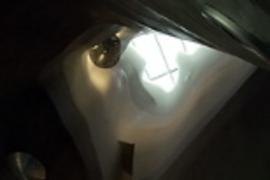 ↓ Download Image
Caption: Looking up through a "study cave" in Simmons.

Caption:
Looking up through a "study cave" in Simmons.

Freshmen Dheera Venkatraman of Flemington, N.J., and Akhil Shashidhar of Pickerington, Ohio, met in August when they arrived on campus to discover they'd been slotted to share a room in Simmons Hall. Five weeks into their first semester at college, the two act as a synergistic pair.

In a fast-paced conversational volley, they describe the decor of their double and their feelings about Simmons' architecture.

"I love it," says Venkatraman. "Where else do you get a pentagonal-shaped room?"

"It's not really a pentagonal shape, is it?" interrupts Shashidhar, and a discussion breaks out over what to call this rectangular room with an amorphous rock-like curve reaching from ceiling to floor.

The "splodge," as Shashidhar calls it, takes up part of the front and side walls and grows smaller near the top, so it takes up less ceiling space than floor. The room has only three corners. In the common room next door, the "negative splodge" creates a recessed curve. The splodge looks like white, dusty rock.

"Welcome," a loud, deep voice suddenly booms from the computer on Venkatraman's desk, apparently responding to an unseen visitor outside the door. A laser installed by the two freshmen reacts to anyone entering the recessed entryway leading to three dorm rooms - theirs and two neighbors. The feature stays on all night, they said. "By the time you go to bed at 4 o'clock, you don't hear anything," says Shashidhar.

"It's definitely different from the usual four-sided room," concludes Venkatraman. "There are things you can do with a curved wall that you can't do with a straight one." But neither could really put their fingers on just what those things might be. Rock-climbing was mentioned as a possibility, but quickly dismissed as impractical in a dorm room. Besides, the wall is plaster, not rock.

All the furniture in the room is modular. Shashidhar has moved his lower bunk, placing it across the room from the top half. The area under the top bunk is now common space. Two desks sit head to head in the middle of the floor. Two narrow closets stand side by side between the top bunk and the front door, across from the splodge. A tall bookcase filled mostly with packages of food and empty water bottles stands on the bit of wall between the door and the splodge. The room has six windows each two feet square, seemingly placed randomly in two rows running from the middle of the wall to the corner. Some rooms have as many as 38 windows, according to Venkatraman.

The building's completion date slipped a bit, so students moved in before work was finished, and the first few weeks have presented some challenges for residents. The kitchen is not yet operational, so the evening meal is brought in and placed in a common area downstairs.

"I really like the whole dorm," says Venkatraman. "There are problems with living in a new dormitory, but in general, I totally like the architecture."

"It's really great to walk into your dorm and see, 'Wow! We got an Athena cluster!' or 'Wow! We have a dinner today,'" says Shashidhar. "One day I walked into the bathroom and it suddenly had a mirror. The game room? One day it just appeared."

The two agree that they love the new residence hall but disagree on just what makes it beautiful.

"It's so great because it's so ugly. You can't walk past it without noticing it," says Shashidhar.

"It's like something from Mars just landed in the middle of MIT. That's what it's like," says Venkatraman. "Beautiful and interesting.

"It's just cool," agrees Venkatraman. "It's something apart from the traditional architecture at MIT."