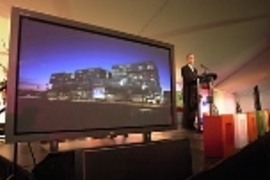 ↓ Download Image
Caption: Simmons Hall is aglow on screen to President Charles Vest's right at the dedication of the new dorm last Friday.

Caption:
Simmons Hall is aglow on screen to President Charles Vest's right at the dedication of the new dorm last Friday.

The road to the Simmons Hall dedication on Friday was a golf cart route from the Johnson Athletic Center that wound through the athletic fields, affording a broadside view of the building from a distance. The multicolored aluminum sheathing glittered over the 10-story concrete block perforated with some 5,500 two-foot square windows.

Donors and their family members, students and staff trouped into a six-peaked white tent for the dedication, set up directly opposite the new undergraduate residence. Its opening on Aug. 20 marked the first time all freshmen could be housed on the MIT campus.

Simmons Hall, designed by New York-based architect Steven Holl, has generated critical acclaim from a number of critics. That enthusiasm was mostly mirrored by the crowd, who later toured the building.

Vest underscored the diverse challenges and pressures inherent in designing any new building at MIT, and he emphasized that Simmons Hall symbolized not only the "courage and commitment of Dick and Dottie Simmons" but also a "harmonious whole far greater than the sum of its parts."
/newsoffice/tt/2002/oct09/simmons-vest.jpg
To illustrate his "harmonious whole" point, Vest cited pressures on the design and building processes that included mandates to create daring and innovative architecture; to truly serve the needs of its users; to be a good neighbor to its abutters, and to realize the commitment to community-building stressed in the 1998 Report of the Presidential Task Force on Student Life and Learning.

"The brilliance Steven Holl brought to the design of Simmons Hall makes it unlike anything on this campus or anywhere else. It will be a marker for architectural excellence for years to come. Thank you, Steven, for this extraordinary gift," said Vest.

"Like so many of MIT's great financial donors, Dick has been generous not only with his money but with his time. His service with the Corporation and with our visiting committees has been of enormous value to the Institute, and has kept him in close touch with the needs and aspirations of his alma mater.

"As an alumnus, an accomplished and successful businessman, and a sympathetic advisor to the Institute, he has been in a perfect position to make many contributions to the improvement of student life at MIT," said Vest.

He also acknowledged another "debt of thanks" to Bill and Betsy Leitch, who endowed the Leitch Professorship in Residence to assure that MIT could provide the necessary support for a senior faculty member to serve as a housemaster for Simmons Hall.

Vest departed from prepared text twice to express his personal enthusiasm. Describing his own early-morning runner's-eye view of Simmons Hall as one of "flashing brilliance" due to the way the windows reflected sunlight, Vest recommended everyone "get up at 6:30 a.m. to get the view." He also asked Vicki Sirianni, director of the Department of Facilities, to stand for a round of applause for her leadership in the construction and maintenance of MIT's facilities.

Each person who stood at the Mondrian-style stained-glass podium expressed enthusiasm for the building, gratitude to the donor and his family, and confidence in MIT's vision of a strong and constantly renewed residential community.

Said Gilja, "Living groups are the building blocks of MIT community life, and the 240 upperclassmen and 110 freshmen in Simmons Hall express our gratitude to Richard Simmons. It's a work that's still under construction. It's a place that's changing every day. Thank you!"

"We celebrate this new milestone in our campaign to increase community at MIT," Clay said. "With its spaces for study, student collaboration, performance and artistic work, Simmons Hall has already shown itself to be a building that is also a vessel for a continual renewal of student community."

Essigman focused on the positive effects Holl's design has had on his own role as housemaster of the new dorm.

"What a gift! This is really the right direction. As for mandatory dining, it is really working. It allows several hundred students to come together nightly over dinner. And, to Steven Holl, thank you for the great acoustical insulation," Essigman said.

Essigman also thanked the Leitches for "removing from our shoulders the need to raise money for special events" and for "offering to come by with brooms and mops when it looked like construction might slow down."

Associate housemaster Muriel Medard, professor of electrical engineering and computer science, presented Simmons with a watercolor by Holl of the residence and a set of the final building plans.

Simmons' comments showed his warm regard for MIT and his love for his family. "We are proud to have our name identified with MIT and this new building," he said.

Simmons' daughter, son and grandchildren joined him at the podium. Said Amy Simmons Sebastian, "This means a lot to three generations of our family. Our father's love for MIT goes back many years, and Simmons Hall gives us a chance to thank MIT for all it has done for my father and all of us."

Sebastian also "appreciated the opportunity to honor the memory of my mother, who always encouraged us to strive for excellence," she said.

Brian Simmons, who had spent quite some time in Boston traffic and arrived a little late, said with enthusiasm, "What a thrill it is to see this building completed and to be here for the dedication."