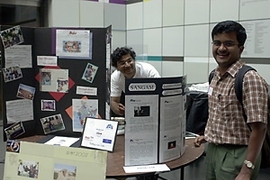 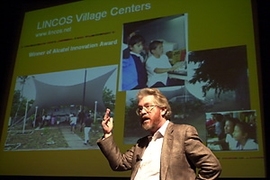 The first annual MIT Development Forum was a living example of the venerable rock music maxim that sometimes the path to world peace leads straight through a good party.

The festive afternoon event on Sept. 20 transformed the lobby of Bartos Theater into a "development midway" that offered MIT newcomers a chance to meet with students and faculty engaged in academic and extracurricular international programs for justice, global health and sustainable development.

"We had three goals for students. We wanted to educate them about opportunities to get involved in development; to inspire them to courageously do work they feel called to do both at MIT and in the larger world; and to talk to others with the same interests," said Rev. Amy McCreath, MIT's Episcopal chaplain and coordinator of the Technology and Culture Forum, one of the organizers of the event. "We want people to learn not just ideas, but to talk to one another."

The other organizers were the Graduate Student Council, the Public Service Center, MIT TechLink and Digital Nations Consortium.

One of the two keynote speakers was Alex (Sandy) Pentland, the Toshiba Professor of Media Arts and Sciences, co-founder of MIT's Digital Nations and founding director of Media Lab Asia. Pentland, known for his work in wearable computers, is a pioneer in bringing technology to the developing world. He spoke in enthusiastic terms about opportunities for students in Media Lab Asia programs.

"We're at a unique time, one in which the dichotomy between building a career in science or engineering and making a difference in the world can be resolved. You can do what you like to do! You can get in on the ground floor! We - Digital Nations and Media Lab Asia - have programs in Latin America, the Caribbean and other countries. You have an opportunity to make 'technology for the masses' a reality," said Pentland.

"Can we take our sights off Silicon Valley and New York City? Can we reinvent high tech for poor people? Why don't you figure out how to take what's been done with toys in this country and apply it to devices for health care in the developing world? We even have money for UROPs. It's the deal of a lifetime," Pentland declared.

Ralf Hotchkiss, senior research scientist and technical director of the Wheeled Mobility Center at San Francisco State University, spoke about teaching design and construction of wheelchairs both in the U.S. classroom and in the developing world.

Hotchkiss, co-designer of the Whirlwind Wheelchair, has organized a network of wheelchair builders at 30 workshops in 25 developing countries. He relies on a wheelchair himself.

"The bicycle of 1880 is more advanced than the wheelchair of today. Twenty million people in the Third World are without wheelchairs and must build them from scratch. But great ideas do trickle up from the Third World to the West," said Hotchkiss, adding that it was "impoverished inventors in Uganda and Nicaragua" who solved some of Hotchkiss' own wheelchair design and engineering problems.