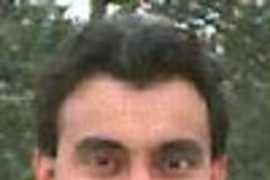 CAMBRIDGE, Mass. -- Madhu Sudan, an associate professor in the Department of Electrical Engineering and Computer Science, has won the 2002 Rolf Nevanlinna Prize, one of the most prestigious international awards in mathematics. He was recognized for his work in theoretical computer science.

The award, announced August 20 at a meeting of the International Mathematical Union (IMU) in Beijing, recognizes "both existing work and the promise of future achievement," according to the IMU. As a result, it is limited to mathematicians under the age of 40. The prize is awarded every four years.

"We are all delighted by this well deserved recognition of your superb research and we are proud to have you as a faculty colleague," Dean of Engineering Thomas Magnanti told Sudan in a congratulatory e-mail. "I hope you are on cloud nine!"

Sudan, 35, was honored for outstanding contributions in mathematical aspects of information sciences. "His work is characterized by brilliant insights and wide-ranging interests," according to the American Mathematical Society. He could not be reached for his reaction to winning the coveted award.

Commented Professor John Guttag, head of the Department of Electrical Engineering and Computer Science (EECS): "Madhu combines enormous technical virtuosity with a rare gift for choosing problems that are both important and deep. His accomplishments are important not only in their own right, but for the impact they have on the problems on which others choose to work. Madhu is also a great colleague who contributes to EECS and MIT in many ways beyond his research accomplishments."

The Mathematical Association of America described Sudan as a "a main player in the development of methods for a 'verifier' (typically a computer) to establish with a high degree of probability whether a proof is correct. He has also made important contributions to error-correcting codes. These codes play an enormous role in securing the reliability and quality of all kinds of information transmission, from music recorded on CDs to communications over the Internet to satellite transmissions."

Sudan, who celebrates his 36th birthday on Sept.12, is a native of Madras (now Chennai), India. He received the B. Tech. degree in computer science from the Indian Institute of Technology in New Delhi in1987 and the Ph.D. in computer science at the University of California at Berkeley in 1992. He was a researcher at the IBM Thomas J. Watson Research Center in Yorktown Heights, N.Y., from 1992 to 1997 before joining the MIT faculty in 1997.

For more information on the Nevanlinna Prize visit the web sites of The International Mathematical Union and the Mathematical Association of America.