Team One is No. 1 in global robot contest 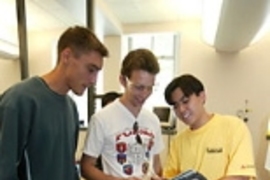 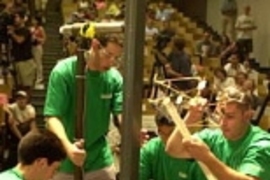 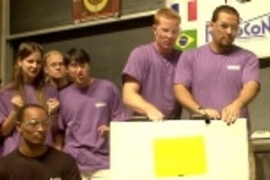 Caption:
Left to right: Julien Barrier of France, MIT's Martin Jonikas of the United States and Alexandre Takeshi Ushima of Brazil collaborate on building a robot from scratch using a tablet PC as part of the International Design Contest.
Credits:
Photo courtesy / Microsoft

Caption:
While their teammates root at left, Lilac Team members Peter Weimann of Germany, left, and Eric Dominguez of the USA concentrate on guiding their machine.
Credits:
Photo / Donna Coveney

The final competition, held in MIT's Room 26-100, went from loud to louder to booming as the audience cheered favorite teams or machines.

Professor Alexander H. Slocum of mechanical engineering kept the volume on "max" with his commentary and mixed-pattern ensemble of Hawaiian shirt and Dilbert tie.

"The future of the world is assured by these critically creative kids. By giving people the tools to design together, the world could be a happy place. I wish all the world leaders could see this," Slocum shouted above the din.

Martin Jonikas, a junior in mechanical engineering, represented the United States and MIT on Team One. Jonikas, who won MIT's famed 2.007 engineering contest last spring, acknowledged the pressure he felt from family and friends to replicate that performance.

While victory was "sweet," he said, the fun of the contest experience was most important. It would have been "totally worth it, no matter what happened," he said.

Also represented in the 2002 International Design Contest were Japan and the United Kingdom. Team members met for the first time at MIT on Aug. 5 when they were given identical kits of parts, including motors, rubber bands, gears, magnets and wheels.

Corporate sponsors of IDC 2002 included Microsoft, Mitsubishi Electric, NHK, PTC, Solidworks and Agencia Estado. In addition, some research from the iCampus RobotWorld program is being leveraged to help bring some of the latest design teaching resources to the IDC.

IDC 2002 contest participants were also among the first in the country to use Microsoft Tablet PCs for design and collaboration, as part of MIT and Microsoft's iCampus alliance for educational technology. Dean for Undergraduate Education Robert Redwine and Professor Rohan Abeyaratne, head of the Department of Mechanical Engineering, provided the resources to accommodate the students in the dorms and run the contest from the Pappalardo Laboratory.