Research on arsenic and old lakes points to nitrate pollution 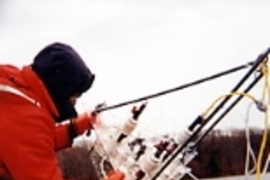 Caption:
David Senn with the filtration unit he and Professor Harry Hemond built to take water samples from the depths of the Upper Mystic Lake.
Credits:
Photo / Daniel Brabander

MIT researchers have shown that a common pollutant strongly impacts the behavior of arsenic and possibly other toxic metals in some lakes, adding to scientists' understanding of how such elements move through the water.

"The work shows that nitrate pollution - which arises from sources such as automobile exhaust, wastewater disposal and fertilizers - is more important in lake dynamics than had been thought," said Harry Hemond, the Leonhard Professor of Civil and Environmental Engineering and an author of a paper on the work that appeared in the June 28 issue of Science. "This is a linkage we need to understand if we want to manage water quality."

In an interesting twist, said Hemond, the nitrate pollution, which is also associated with noxious impacts such as excessive algal growth, was found to have a mitigating effect. It reacts with naturally occurring iron to create iron oxides that in turn adsorb arsenic. "The result is a suppression of seasonal arsenic release into the water," said Hemond, who is director of MIT's Parsons Laboratory.

For over a century, hundreds of tons of toxic wastes from leather, chemical and other industries were dumped into the waterways of the Aberjona, the real-world setting of the movie "A Civil Action." Today the dumping has stopped, but the pollutants - including considerable amounts of solvents, chromium and arsenic - remain. For the last 14 years, MIT researchers have been exploring the fate of these wastes and the chains of events that can lead to effects on human health.

The work reported in Science began with a mystery. Iron and arsenic in water sampled from the depths of Upper Mystic Lake in summer were not in the chemical forms that Hemond and earlier graduate students expected. Senn's assignment: find out why.

In the Northeast, lakes follow a seasonal cycle. In the summer, they become stratified: cold water on the bottom is topped by a warm layer. The two don't mix and have different properties. For example, the top layer is flush with oxygen while the bottom layer has none.

The mystery that Senn and Hemond were exploring occurs in the bottom layer, which complicates sampling. "If the water samples are exposed to oxygen during sampling, the chemistry could change before we'd have a chance to measure it," Senn said. So he and Hemond developed a filtration unit that allowed them to filter water samples while they were still deep within the lake, preventing oxygen contamination.

The two had a hunch that nitrate pollution was responsible for the anomalous forms of iron and arsenic (nitrate is common in Upper Mystic Lake). So over several months they tracked the concentration of nitrate, along with the concentrations and chemical forms of arsenic and iron. Higher nitrate concentrations did indeed coincide with the previously unexpected particulate forms of iron and arsenic. Culture studies in the lab and thermodynamic calculations further supported the feasibility of the reactions observed in the field.

The work not only aids scientists' understanding of how arsenic moves through polluted, stratified lakes, but also has implications for other pollutants, including phosphate and toxic metals (e.g., lead, cadmium and zinc). These contaminants are similarly adsorbed onto iron oxides, so they are expected to have similar behaviors in lakes. Hemond further expects that nitrate pollution could be important in groundwater or marine systems contaminated by arsenic.

The two researchers emphasized the significant contributions of earlier students and other faculty. "I came in after a lot of people had already done much work to identify the major questions to ask," Senn said.