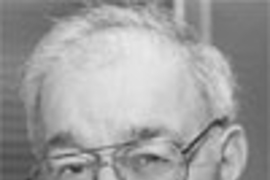 CAMBRIDGE, Mass. -- Samuel A. Goldblith, a survivor of the Bataan Death March who became a professor of food science and technology at MIT, a leader in the field of food preservation and a tireless advocate of business and educational cooperation between the US and Japan, died at Kindred Hospital in Peabody, Mass., on December 28, 2001. A resident of Melrose, Mass., he was 82.

Paul E. Gray, professor of electrical engineering and MIT president, emeritus, said of Goldblith, "His love of life and family, his passion for service, his convictions about the healing power of love and his boundless energy were an inspiration for me. MIT is a better place because of Sam Goldblith."

Steven R. Tannenbaum, Underwood-Prescott Professor of Toxicology and Co-director of the Division of Bioengineering and Environmental Health, was Goldblith's student, colleague and friend.

"During the war, he saved his own life and the lives of his men by squeezing the juice out of grass to get vitamins. Back at MIT, he became a pioneer of bioengineering. As an administrator, Goldblith was hugely successful in bringing together business interests and academic interests; in raising money for MIT, and in establishing the MIT Japan office," Tannenbaum said.

But the sum of the man went far beyond his astonishing range of achievements, Tannenbaum said.

"Goldblith was a unique, generous, charismatic person, and a man of endless energy. We had to run to keep up with him. He had a loud voice, a booming laugh, a huge store of jokes-mostly unrepeatable limericks-and a nickname for everyone," Tannenbaum said. "He even had a regular table at Loch-Ober restaurant in Boston. And if you ate with him, you knew-you didn't even try to pay. He wouldn't allow it."

Born in Lawrence, Mass., on May 5, 1919, Goldblith received the SB degree from MIT in 1940. It was a dream come true for his father, an immigrant from Russia, Goldblith wrote in his autobiography, "Appetite for Life," published in 1996.

Goldblith would cling to that dream, to the strength of his family's religious life and to his new marriage to Diana Greenberg throughout the harrowing half-decade to come.

In 1942, Goldblith, a 2nd Lieutenant in the US Army Corps of Engineers, became a prisoner of war.

Beginning with the grisly 60-mile Death March across the Bataan Peninsula in the Philippines, he spent more than three years in prison camps in the Philippines and on the "Hell Ships" used to transport prisoners to camps in Japan.

Though he, too, neared starvation, Goldblith, ever the scientist, continuously studied the effects of malnutrition and its related diseases on those around him.

In one POW camp, Goldblith set up a method for calculating vitamin A deficiency by "measuring the ability of volunteers to see a fixed intensity light source through successively thicker sheets of Japanese toilet tissue. Not a sophisticated test," he noted, characteristically wry. "But at least it got published in Science."

While a POW, Goldblith worked on studies of beri-beri, hypoproteinemia and other diseases. His definitive calculations on food and sanitation in POW camps were published in the Office of Naval Research Reports in 1947.

In his autobiography, Goldblith credits his good luck, belief in God, others' kindness and an MIT chemistry class with keeping him alive.

At one point, he recalled, he used iodine from his first aid kit to dose the foul water in his canteen, thus avoiding "the scourge" of dysentery.

"I remembered from 5.01 that iodine, chlorine and bromine were in the same section of the Periodic Table," he wrote.

Goldblith was awarded two Bronze Stars and a Silver Star for his military service. While he acknowledges these in his book, Goldblith typically devotes much more attention to the help he received from others during the war years, carefully listing their names and what they did.

Kenneth A. Smith, professor of chemical engineering at MIT, recalled Goldblith did more than remember others' kindness. He repaid it loyally.

After the war, Goldblith and his wife returned often to the Philippines to thank the Belgian Catholic nuns who had brought the POWs life-saving food and medical supplies. The Goldbliths remained in close contact particularly with Sr. Marie Arthur, visiting her and sending gifts, until her death in 1980.

After the war, Goldblith resumed his studies at MIT in food technology, receiving the SM degree in 1947 and the PhD in 1949. He was a professor of food science and technology from 1959 to 1974.

He was a leader in research into domestic uses of microwave ovens and in freeze-drying, which was essential to the US space program.

Goldblith was author or co-author of over 250 articles in scientific journals and the editor or co-editor of six books in the field of food science and technology.

He received numerous awards and honors, including the Distinguished Food Scientist Award, and he served on several committees of the National Academy of Science/National Research Council. These included the Advisory Board on Military Personnel Supplies from 1963-1971.

But, in true MIT manner, it was Goldblith's experience of the unique relationship between teacher and student that forever changed his own life and life at the Institute.

According to Tannenbaum, Goldblith was a respected mentor, one who inspired loyalty and affection in his graduate students.

"I came to MIT to study metallurgy. I switched to food science because of Goldblith. It was the best decision I ever made. A mentor is someone who guides you through life, helping you make important personal and professional decisions. Sam Goldblith selflessly gave people opportunities. He was tough, demanding and helped others do their jobs better than they ever thought they could," Tannenbaum said.

Goldblith's experience as a mentor brought him face to face with the importance of letting go of the past, sharply contrasting with his wartime experience, which taught him to hang on to the past to survive.

His relationship with Yaichi Ayukawa, his first graduate student, a young man from Japan, provided a challenge to the Bataan survivor-turned-professor.

The relationship was "a mechanism for Goldblith to get rid of the bitterness of the war," said Tannenbaum.

It worked superbly well. Ayukawa, whose thesis Goldblith supervised, became a lifelong friend. Together, they worked to open the MIT Japan Office in 1976 and collaborated in business over the years.

Goldblith commented that Ayukawa, who founded Techno- Venture Co., Ltd., and whose father founded Nissan, was the "first venture capitalist in Japan."

"Sam's loyalty to MIT was boundless. He accepted appointment as Director of the Industrial Liaison Program at a time when it was in decline (1974). He was the first member of the faculty to serve in that program which was revitalized and greatly expanded under his leadership. He proposed expanding the ILP to include more European corporations and to open it to Japanese corporations. He created the MIT ILP office in Japan and made MIT a genuine presence in that country. A few years later, I asked him to serve a vice president for resource development. In this capacity he was instrumental in planning the Campaign for the Future ('97-'02) and in strengthening the fund-raising capacity of the Institute," Gray said.

Goldblith served MIT as an administrator from 1974 until his retirement, travelling extensively on behalf of MIT as well as for his own interests. He served as MIT's vice president of resource development from 1978 to 1986.

In 1984, in recognition of his contribution to the advancement of food science and to the promotion of friendly relations between the US and Japan, Goldblith received the The Second Class of the Order of the sacred Treasure from the Emperor of Japan. He is only the second non-Japanese person to receive this high honor.

The Samuel A. Goldblith Career Development Chair was established in 1993 and partially funded by Ayukawa's family. Though Goldblith's student, Yaichi, had died, his son and widow attended the ceremony at MIT in Goldblith's honor.

The first holder of the Goldblith chair was Professor Peter Dedon of the department of toxicology. It is currently held by James L. Sherley, assistant professor in the Division of Bioengineering and Environmental Health.

Goldblith left his own modest summary of a remarkable life.

"I loved my wife, my family, my country, my religion, and my school (MIT), which I tried to serve faithfully. I served my country in war and peace by building bridges of understanding with Japan.

"I was a scientist who understood business. I was lucky to become a vice president of MIT. I hope that I did not disgrace my family in the job!"

In his eulogy, Rabbi Thomas M. Alpert of Temple Tifereth Israel in Malden, said, "There is a name in Hebrew for a person who has no time for hate. He is called a tzaddik, a righteous one." That was Sam Goldblith.

Samuel Goldblith is survived by his daughter and son-in-law, Judith and Richard Clark of Melrose, his son, Jonathan of Frederick, Maryland and two granddaughters, Sarah Clark and Rachel Happel. His wife, the former Diana Greenberg, died in 1990. He was also the father of the late Errol D. Goldblith.