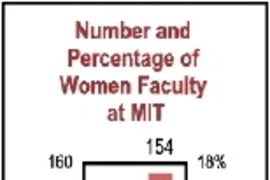 ↓ Download Image
Caption: The number of women faculty at MIT has increased 40 percent since 1994, when the gender study began in the School of Science.

Caption:
The number of women faculty at MIT has increased 40 percent since 1994, when the gender study began in the School of Science.

MIT has completed a rigorous and systematic study of the status of women faculty in the entire university with publication Monday of reports on the schools of architecture and planning; engineering; humanities, arts and social sciences; and the Sloan School of Management.

The 2002 Reports of the Committees on the Status of Women Faculty complete the groundbreaking 1999 report on the status of women in the School of Science, summarizing data and narratives of women faculty members' experiences in each of the schools.

The reports were discussed at a late-afternoon faculty meeting. The 100-page document is available online here.

The 1999 report had worldwide impact and prompted similar studies in many other universities, particularly in research universities that have a strong emphasis on science and engineering.

President Charles M. Vest said, "The response to the 1999 report on the status of women faculty in the School of Science taught us that putting facts, figures and personal statements on the table for all to see enhances understanding, defines issues and stimulates solutions.

"Since that report, the number of women in leadership roles at MIT has increased markedly, the collegial environment has improved and monitoring women's status, numbers and experiences has become systemic. But more remains to be done. MIT will not allow this issue to fade into the woodwork," Vest said.

The findings of the studies show a similarity of experience among women faculty across MIT on a number of dimensions that negatively affect their professional lives.

The new reports unflinchingly demonstrate how marginalization has frustrated, even thwarted, women's career paths. Marginalization is quantified by inequities in resources, access to leadership roles and exclusion from high-level decision-making processes. Some differences in compensation were noted, as well as low representation in many departments, and greater difficulty for women in balancing family and work responsibilities.

Identification of problems has resulted in corrective action on many individual concerns, and systemic progress has been made as well, including the appointment of 16 women professors to academic leadership positions, more women on the faculty, increases in salaries, a more collegial environment, development of guidelines for hiring practices and new family/work policies.

Following the 1999 study, MIT revised promotion policies to delay tenure decisions to allow for childbearing and to provide paid release from teaching for care of a family member. The new reports offer recommendations for innovations in recruiting, hiring and promotion policies to accompany the study findings.

The report represents two years of research by four faculty gender equity committees, made up of both women and men.

Provost Robert A. Brown said, "The committees' work has already resulted in progress toward having a truly diverse faculty that will lead the Institute into the century ahead."

On a personal note, Brown added, "One of the most incredible parts of my experience with working with the faculty in the development of these studies and in the Council on Faculty Diversity has been the wonderful spirit that permeates this Institute. All of the faculty involved in these studies have approached the issues in a wonderfully positive way. I am confident that we can build on this momentum."

According to the report, a woman professor at one point asked Brown, a professor of chemical engineering, whether these complex problems were really fixable. The provost "seemed quite taken aback," the report said.

Nancy Hopkins, the Amgen Inc. Professor of Biology, who served as the first chair of the 1999 Women in Science Committee, praised MIT for its "creative and bold approach to these complex issues. MIT is doing a great job in collaborating on the reports; on bringing women into the administration of science and engineering and on finding a way to ensure that any inequities that arise get caught and corrected."

Commenting on the new reports, Hopkins said, "We all thought that women getting the jobs was all you needed to achieve equality. But it turns out that the experiences of different people are not necessarily the same, or equal, in the same place." Hopkins is co-chair of the Council on Faculty Diversity and now sits on the Academic Council, the top leadership of MIT.

A version of this article appeared in MIT Tech Talk on March 20, 2002.