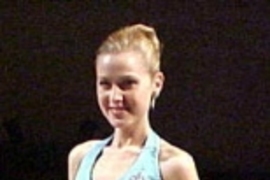 CAMBRIDGE, Mass.--Erika Ebbel, a senior in chemistry at MIT, has won a $1,750 scholarship after being named second runner-up at the 2002 Miss Massachusetts competition. The contest was held June 8 in Fall River and determined Massachusetts' representative at the upcoming Miss America pageant.

Each of the twenty contestants for the Miss Massachusetts title had already won a preliminary pageant. Ebbel was named Miss Southern Massachusetts earlier this year.

The scholarship will be applied toward her final year of study at MIT. In addition to her chemistry major, Ebbel is a premed student interested in cardiology, and as such, sees more school on the horizon.

Ebbel also won a $150 Preliminary Talent Award for her classical piano performance at the contest. A graduate of the San Francisco Conservatory of Music, she continues to develop her talent as a music minor at MIT.

Ebbel entered her first pageant last fall at the insistence of a friend. She quickly learned the subtleties of competition and following the event, the judges encouraged her to enter another contest. She took their advice and won the Miss Southern Massachusetts crown on her next outing.

After her win, Ebbel considered the similarities between MIT and the world of pageants: "To win a pageant, you must have numerous interests, poise, intelligence, good speaking skills, confidence and the ability to persevere. To succeed at MIT, an individual must exhibit similar traits."