Model predicts origin and outcome of defects in a material 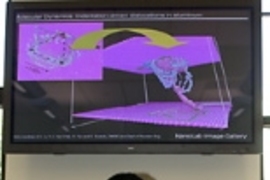 ↓ Download Image
Caption: Ting Zhu (left), Ju Li, and Krystyn Van Vliet stand below an image in MIT's NanoMechanical Technology Lab that is akin to one they included in their paper on predicting defects in materials.
Credits: Photo / Donna Coveney

Caption:
Ting Zhu (left), Ju Li, and Krystyn Van Vliet stand below an image in MIT's NanoMechanical Technology Lab that is akin to one they included in their paper on predicting defects in materials.
Credits:
Photo / Donna Coveney

Defects such as cracks in a material are responsible for everything from malfunctioning microchips to earthquakes. Now MIT engineers have developed a model to predict a defect's birthplace, its initial features and how it begins to advance through the material.

The model could be especially useful in nanotechnology. "As devices get smaller and smaller, understanding the phenomena of defect nucleation and growth becomes more and more important," said Subra Suresh, head of the Department of Materials Science and Engineering (DMSE). A seemingly minuscule dislocation - a local disorder in the arrangement of atoms inside a material - or a crack can drastically compromise the performance of a device.

"There has been much past work on defects in materials, but no one has really explained how a crack or void nucleates in the first place. This work is a first step to that end," said Suresh, an author of a paper on the work that appeared in a recent issue of Nature.

His coauthors are Ju Li (Ph.D. 2000), now a professor at Ohio State University); Krystyn J. Van Vliet (Ph.D. 2002), now a postdoctoral associate at Harvard University/Children's Hospital until she joins the MIT faculty next year; Ting Zhu, a graduate student in mechanical engineering; and Sidney Yip, a professor in the Department of Nuclear Engineering and DMSE.

In a commentary published along with the Nature paper, Jonathan Zimmerman of Sandia National Laboratories wrote that the MIT researchers "have achieved a significant step towards understanding the defective world of materials in which we live."

Suresh noted that one of the challenges in materials science is showing a seamless transition from defects on the atomic or molecular scale to the overall performance at the engineering level. "We have not had a [good] handshake between the two," he said.

The model described in Nature provides predictive capabilities that transition smoothly across multiple length scales. "This approach can be used to not only predict nucleation of defects between atoms, but also shearing [slipping] between plates in the Earth, the phenomenon behind earthquakes," Van Vliet noted.

The model "captures many key features observed in experiments," continued Zimmerman in his commentary. As a result, Van Vliet said, "we can use it to make predictions about when and how defects will nucleate, rather than having to do experiments for each material or stress scenario."

In the Nature paper, the researchers also describe how atomic defects like a crack or dislocation - singularities seen on the continuum level - can develop from waves. "It's like the life of a butterfly, proceeding in different stages," said Li.

The world is filled with invisible waves such as sound waves traveling through the air or shear waves through a solid. Under certain conditions, however, a wave can become unstable. From there, a defect can nucleate in four stages, said Li.

First, the amplitude of the wave grows. Slowly the wave steepens, similar to what happens to ocean waves as they approach the shore. In the third stage, part of the wave becomes so steep that it can no longer be described at the continuum level and must be transferred to an atomic description. In the fourth stage, the atomic-scale shockwave "gets trapped in the rough terrain of the microscopic energy landscape, resulting in a defect," Li said.

The MIT team stresses that the model "was not developed overnight." Rather, it's based on many years of theory and experiments by myriad others. In addition, "we now have experimental and computational tools that until very recently did not exist," Suresh said. Such tools include the use of a soap-bubble raft as an atomic-scale model of metal structure to visualize defect nucleation (MIT Tech Talk, June 13, 2001), and experiments on metallic surfaces conducted using the equipment available in DMSE's NanoMechanical Technology Laboratory (MIT Tech Talk, March 20, 2002).

Other key factors in the team's success were the people involved and their diverse areas of expertise. "Today there are many problems that require these multidisciplinary efforts because they're so complicated," Yip said. Perhaps most importantly, however, he stressed the researchers' working relationship. "The great human chemistry in this group gives a really happy flavor to this story."

The work was supported through a Defense University Research Initiative in NanoTechnology by the Office of Naval Research, with additional funds from the National Defense Science and Engineering Graduate Fellowship Program, Honda R&D Co., Ltd., the Air Force Office of Scientific Research, the National Science Foundation/Knowledge and Distributed Intelligence and Information Technology Research Initiatives and Lawrence Livermore National Laboratory.