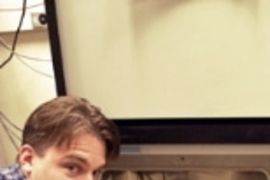 CAMBRIDGE, Mass.--MIT engineers are excited about a new technique for repairing cartilage that could have significant advantages over the procedure now commonly used.

This could affect people disabled by osteoarthritis, which slowly destroys the tissue that cushions joints. Hundreds of thousands others damage cartilage through sports-related injuries and other accidents.

The new technique involves growing cartilage cells within a novel "designer" gel outside the body, then ultimately delivering the cell-seeded gel into a damaged joint. The idea is that the tissue will grow and integrate with the normal cartilage surrounding it while the gel slowly degrades, leaving behind a functioning tissue.

The researchers describe the first promising steps toward this goal in the issue of the Proceedings of the National Academy of Sciences published online the week of July 15-19. Although the engineered tissue has yet to be tested in animals, "it has mechanical and biochemical properties near to those of native cartilage," said Alan Grodzinsky, a professor with appointments in the Biological Engineering Division, the Department of Electrical Engineering and Computer Science and the Department of Mechanical Engineering.

"The implication is that the [new] gel provides a suitable environment for encapsulation of cartilage cells, with the goal of creating an implant that may be used to repair cartilage defects," said John Kisiday, first author of the paper and a graduate student in the Biological Engineering Division.

There is currently only one procedure approved by the U.S. Food and Drug Administration for repairing cartilage defects. It involves extracting a small amount of cartilage cells from a patient, coaxing them to multiply outside the body, and then implanting the new cells into the damaged area.

But the procedure "is expensive, with a total cost of around $30,000," Grodzinsky said, "and it does not result in the generation of a true articular cartilage." The only other treatment for late-stage osteoarthritis is to replace the affected joint with an artificial one, a procedure "that most surgeons prefer not to perform on patients younger than about 60 years of age, since joint replacements have a finite lifetime," he said. According to the American Academy of Orthopaedic Surgeons, more than 442,000 joint replacement procedures are performed each year in the United States.

The MIT team is hopeful that the "cartilage gel" could be implanted arthroscopically, through a small external incision. Such minimally invasive surgery is not only less expensive, but "reduces the recovery time for the patient," Grodzinsky said.

In 1993, Zhang discovered that proteins in the human body, when in fragments called peptides, can be tweaked to self-assemble into completely new natural materials ( MIT Tech Talk, April 28, 1993 ). Since then, he and others have tailored such peptides to create everything from novel "nanosoaps" ( MIT Tech Talk, April 3, 2002 ) to biomedical devices and industrial fluids.

In addition, said Zhang, "It is believed that the peptide scaffold hydrogel is generally useful for a wide range of cell/tissue types for regenerative biology and medicine." Indeed, cartilage is only the latest tissue to grow on such scaffolds. They have also been used to support nerve cells and tissues including bone and liver.

"There are a number of materials being studied for use as scaffolds in tissue engineering, but this hydrogel has properties thatÂ make it an important candidate," said Grodzinsky.

Zhang noted that the peptide hydrogel is made of interwoven fibers only 10-20 nanometers (billionths of a meter) in diameter.Â "This is in sharp contrast to other biopolymer microfibers, which are some 1,000 times larger in diameter," he said.

"That smaller size scale makes all the difference in the world," Zhang continued. For example, growth factors could be tethered to the peptide structure of the gel to directly stimulate the cartilage cells.

The hydrogel is also biocompatible and can be tailored to have different properties. By choosing an exact sequence of peptide building blocks, for example, the gel could be designed to degrade over a specific time frame. There is also less risk of passing along viruses to the engineered tissues because the peptide is not extracted from animal tissues, which can sometimes be a source of such pathogens.

Cartilage is unusual in that its cells make up less than 10 percent of the overall tissue. The rest of the tissue is composed of a stiff, spongy matrix produced by those cells. So "a major challenge in choosing an appropriate scaffold for cartilage repair," wrote the authors, is identifying a material that can simultaneously stimulate the cells themselves to multiply while coaxing them to produce more matrix. The hydrogel fosters both, they reported.

Scientists also know that cartilage production and degradation are regulated in part by the physical forces or loads put on cartilage as we stand or walk, for example. Similarly, physical forces are also key to the growth and mechanics of engineered cartilage.

To that end, Kisiday has identified mechanical "exercising" conditions that, when applied to the cartilage-seeded hydrogel over several weeks, "increased repair tissue formation and also the mechanical properties of the growing tissue." He reported these results at a June meeting of the International Cartilage Repair Society.

The combination of the peptide scaffold and Kisiday's "exercise regimen" has resulted in a "very appropriate cartilage-like tissue," Grodzinsky said. Several challenges remain, however. For example, at what point do you implant a growing scaffold into the body, and let the joint motion in an animal or human carry development to the final state? "People are just facing that issue now," he said.

The MIT team and others continue to optimize the hydrogel for growing cartilage and other tissues. "Something good is going to come from this--hopefully for our joints," Grodzinsky said.

The work is funded by the NIH and the DuPont-MIT Alliance.