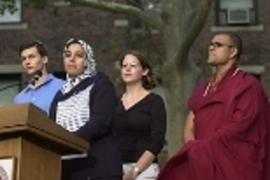 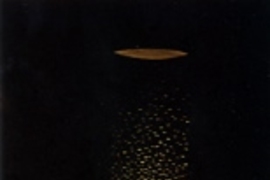 Caption:
A visitor passes through the MIT Chapel during the all-day vigil.
Credits:
Photo / Donna Coveney

MIT's religious student groups remembered last year's terrorist attacks in various ways during the Sept. 11 commemoration, but all shared a faith in God and a hope that people will learn to live together more peacefully.

The Hillel-sponsored "A Moment for Peace: In the Jewish Tradition" on Tuesday night comprised mostly stories, read aloud by members of Hillel, as well as prayers and a rendition of "America the Beautiful."

On Wednesday afternoon, the Muslim Students' Association sponsored "Islam in America: Reflecting, Sharing and Understanding." The event provided an opportunity for Muslims and non-Muslims to talk about the past year.

The Lutheran-Episcopal Ministry held a Holy Communion service following the all-campus gathering Wednesday evening. Attendees lit votive candles as they entered the MIT Chapel and lay them on the circular altar before the service began.

The evening's refrain came from the story of Rabbi Hanina. During the Roman occupation of Jerusalem, Hanina was caught teaching Torah, an act that was strictly forbidden. The Romans tied him to his Torah scroll, surrounded him with kindling and set him aflame. As he lay in the fire, his students asked him what he saw, and he replied, "The parchments are burning, but the letters are flying free."

Stories of Jewish victims of Sept. 11 were then read and each concluded with Hanina's dying words.

One student spoke of Zhanetta Tsoy, an immigrant from Kazakhstan, who was proud and awed by the job she had won as an accountant in the World Trade Center. Her first day was Sept. 11. She was scheduled to begin at 9 a.m. but opted to arrive early to get a good start.

Another talked about Abe Zelmanowitz, an Orthodox Jew who worked in the twin towers as a computer programmer. Upon hearing the evacuation orders, he went to check on his friend Ed Beyea, a paraplegic who was always accompanied by a nurse. Zelmanowitz told the nurse to evacuate, that he would stay with Beyea until help arrived. Each man was able to call his family before the tower collapsed.

To encourage discussion, the session by the Muslim Students' Association began with a skit written by graduate student Mohammed Saeed. In it, two progressive Muslim women are sitting in separate rows on a plane. The seat next to one of them is occupied by a white man who mutters under his breath about "A-rabs." The seat next to the other is filled by an Arab man on his way to a conference.

The white man first blames Muslims for slow lines at airports, then his rhetoric escalates to an endorsement of mass deportation, and finally he suggests that the United States preemptively "nuke Mecca." The woman tries to reason with him, but her arguments about American freedoms and rights cannot rise above the bombast.

In the other row, the Arab man quickly reveals himself as a proponent of terror to rid the Islamic world of Western influence. The Muslim woman seated next to him tries to draw his attention to the many passages in the Quran that praise peace and condemn killing. Her arguments also go unheard.

Some members of the audience questioned the veracity of the characters Saeed had created and wondered if they had been exaggerated for effect. Saeed replied that most of the dialogue was derived from postings on the Internet and words spoken on local talk radio.

The discussion was lively and varied, but the dominant theme was the need for Americans and those living in Muslim nations to confront their societies' internal, hateful elements. Nearly all of the participants believed attempts to silence extremists were destined to fail and proposed relentless education and dialogue.

A student from Pakistan admitted her surprise when she returned home after Sept. 11 to find some of her closest friends happy about what had happened. A student from Saudi Arabia talked about hearing an imam tell a full mosque that killing Jews and Christians was permissible. Both talked about how difficult it is to speak out in these situations and both emphasized the necessity to do so.

The audience also sought to confront American prejudice, but at first, a hypothetical, racist Midwesterner bore most of the blame. As the discussion progressed, most people in the room agreed that the problem was more pervasive and that there was work to be done in almost every community. The sentiment was underscored when a Muslim student admitted that the skit's incendiary line about "nuking Mecca" was not drawn from the Internet or talk radio, but from his own experience with a Massachusetts state trooper.

After everyone at the Holy Communion service exchanged handshakes and wishes of peace and the opening prayer was read, the congregants observed two minutes of silence for the victims of Sept. 11.

Then they sang "When Sudden Terror Tears Apart" with words by Carl P. Daw and music by senior David M. Foxe, who played the piano accompaniment. Written just after the attacks last year, it is a mournful piece about lost lives and innocence. This was the second performance of the hymn and it filled the chapel as completely as the silence that preceded it.

When it came time for Communion, the attendees gathered around the altar, where a thick steel cross was on display. Chaplain Amy McCreath explained that Ground Zero workers had made it from a steel support taken from the World Trade Center wreckage.

The service closed with the hymn "Oh, Praise the Gracious Power," which begins: "Oh, praise the gracious power that tumbles walls of fear, and gathers in one house of faith all strangers far and near."