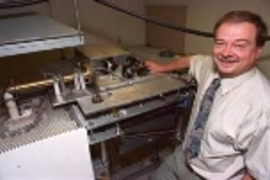 CAMBRIDGE, Mass. -- The MIT inventor of an instrument that will aid efforts to store radioactive wastes in stable glass has been honored with a 2001 R&D 100 Award, his fifth in seven years. The instrument could also have applications in other industries involved in processing molten materials.

Paul Woskov, principal research engineer at MIT's Plasma Science and Fusion Center, won the award for the MilliWave Viscometer. The device is among "the 100 most technologically significant new products" as determined by R&D Magazine and a panel of experts.

The new instrument measures a key parameter for processing molten materials: viscosity. "Viscosity is a measure of how well a liquid flows within stationary boundaries, like a pipe, in response to a given force," Woskov said. "It can indicate the chemistry and quality of a glass or metal product."

The MilliWave Viscometer is special because it works at the temperatures of molten glass and metals. "Its maximum temperature of operation is more than 1,000ï¿½ï¿½ï¿½C higher than viscometers currently on the market." Another type of viscometer that is patented but not commercially available can also operate at these temperatures, Woskov notes, but for a variety of reasons he says his invention "would be much more robust and reliable in a manufacturing environment, and also less costly."

Woskov developed the new viscometer to aid the clean-up of radioactive waste sites left over from the cold war. At over $40 billion this effort has been billed as the largest civil works project in US history. And those costs, said Woskov, "are closely associated with the processing necessary to put the high-level wastes in a stable glass form and then storing this glass for many millennia."

The MilliWave Viscometer will make possible feedback control of the process in which wastes are added to molten glass. Such feedback should "maximize waste loading in the glass, thus improving the efficiency of the glass process and reducing the resulting waste volumes," Woskov said.

The instrument, he concluded, "will have a very significant economic impact on a costly environmental clean-up effort and in the manufacture and development of many material products."

Woskov's colleagues in the development of the viscometer are John Machuzak and Paul Thomas of the PSFC, S.K. Sundaram of Battelle Pacific Northwest National Laboratory, and Gene Daniel of Westinghouse Savannah River Company.

Work on the viscometer was funded by the Environmental Management Sciences Program of the US Department of Energy.