Technology and the Dream portrays black experience as students, faculty at MIT 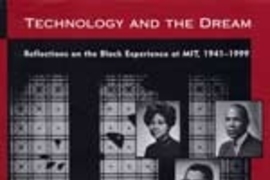 CAMBRIDGE, Mass. -- Technology and the Dream: Reflections on the Black Experience at MIT, 1941-1999, a new book by Clarence G. Williams, adjunct professor of urban studies and planning, provides 175 oral histories in two media (text and CD-ROM) to portray the experiences of black students, faculty, administrators and staff at MIT.

Non-black faculty and administrators who have been "instrumental in making MIT a more welcoming, nurturing environment for blacks and other minorities," are included in Professor Williams's 1,000-page book published this month by the MIT Press.

MIT President Charles M. Vest commented on Technology and the Dream in his presentation at MIT's 27th annual breakfast to honor the legacy of Martin Luther King Jr.

"This truly extraordinary volume holds over half a century of lessons for our future. It is about the complexity of life and race. It is about injustice and about thoughtless, unintended injuries. It displays, for all to see, the gap between where we are and where we ought to be in our quest for an inclusive, just society," President Vest said.

Technology and the Dream opens with an essay by Professor Williams. He describes himself as becoming "a participant in the story of the evolution of social and racial perspectives in an institution of higher learning" in 1972, when he came to work at MIT as assistant dean of the graduate school. In 1974 Professor Williams became special assistant to the president and chancellor for minority affairs.

He wrote Technology and the Dream in order to "give voice to members of the MIT community, both black and non-black, whose reflections on race and issues of race at the Institute are sharp, poignant and instructive. (They) have much to teach us about past, present and future strategies to deal with race and racism in the academic context," he said.

Like most of the men and women he interviewed for Technology and the Dream, Professor Williams has found both fulfillment and frustration in his years at MIT.

"I have found the most joy in teaching a course -- 'Bridging Cultural and Racial Differences' -- offered in the department of urban studies and planning. We explore a range of issues, trying to understand the origins of racism and developing strategies for conflict resolution," he writes.

While "never forgetting how things could or should be in a better world," Professor Williams also writes candidly about his discouragement with the pace of wider opportunities for blacks at MIT.

"I would single out one area -- monitoring and promoting equal opportunity -- as the most frustrating in my nearly three decades at MIT. The problem is partly structural, partly indifference or hostility on the part of non-black faculty and partly insufficient pressure from the minority community on the leadership at the departmental and central administrative levels," he writes.

In addition, Technology and the Dream has interviews with Hubert "Hubie" Jones, who taught at MIT from 1972 to 1977 and who appears each Sunday morning on WCVB-TV's "Five on Five;" Willard Johnson, professor of political science at MIT, 1974-1996, and a leading figure in Boston urban development, and Lynda Jordan (PhD 1995 Chemistry), one of the few Boston urban minority high school students to obtain a doctorate degree from MIT.

Professor Williams is the editor of Reflections of the Dream, 1975-1994: Twenty Years Celebrating the Life of Dr. Martin Luther King, Jr., at the Massachusetts Institute of Technology.