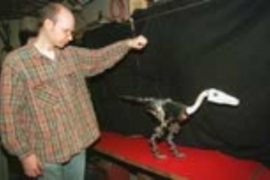 If Peter Dilworth gets his wish, children may one day be able to view walking -- and perhaps running -- 3-D recreations of small dinosaurs. His principal motivation: the lifelike behavior of the creatures, actually robots, would inspire the kids themselves to become scientists or engineers.

Mr. Dilworth, a member of the technical staff at the MIT Artificial Intelligence (AI) Lab, has already met a significant milestone to that end. After about five years of work, his robotic version of a Troodon dinosaur from the Late Cretaceous period -- dubbed Troody -- walked across his desk late last fall.

Now Mr. Dilworth is assembling parts for Troody's successor, which will be a "production prototype" better engineered for a museum environment. For example, it will be sturdier.

The new version will also be about 50-percent bigger (Troody, at about 18 inches high and four feet long, is a "juvenile"), and will look and behave more like the real thing, complete with feathers. "It will kind of look like a big chicken," said Mr. Dilworth, who has been collaborating all along with Gregory S. Paul, an independent paleontologist and artist, to make the robot as lifelike as possible.

Troody's successor should also be able to turn better, walk faster, and perhaps even jog or run. "If it runs, it will be the first 3-D bipedal, or two-legged, walking and running robot in the world," Mr. Dilworth said.

Troody is one of several robots created or in development at MIT's Leg Lab (a part of the AI Lab). The facility, dedicated to simulating and building robots that walk like their biological counterparts, as well as building devices to help people with handicaps walk, was organized in 1980. It is currently directed by Gill A. Pratt of the Department of Electrical Engineering and Computer Science and Hugh M. Herr of the Harvard-MIT Division of Health Sciences and Technology.

"Very little of the world is accessible by wheels," the researchers say. As a result, legged robots could be "useful for everything from exploring inaccessible or hazardous locations to providing service or entertainment in the places we live and work." Other motivations: the research is fun and the results compelling to watch.

Troody is one of two bipedal robots at the lab. The other, M2, approximates the legs of a person. It can stand and walk in place, but cannot yet walk forwards. "There are a handful of other biped robots in the world, mostly in Japan," Mr. Dilworth said, but they use different control systems. As a result, he said, the Japanese robots tend to be very stiff, and more machine-like. "We use series elastic actuators, or springs connected to motors, and low-stiffness control, so the joints are looser, and more biological."

The MIT actuators, invented by Professor Pratt and Matthew M. Williamson (MIT SM 1995, PhD 1999), also make the robots better able to traverse unexpected terrain. For example, Mr. Dilworth said, "I put a notebook on the ground in front of Troody, and it was able to stumble over it without falling. It could theoretically walk over a variety of terrain."

Troody, which weighs about ten pounds, has 16 joints and 36 sensors. "Every joint has a position and force sensor," Mr. Dilworth said. The robot also has a vestibular system -- the equivalent of an inner ear -- that it uses for balancing, and an onboard computer that automatically runs a walking control algorithm.

"I program the algorithm and compile it on my PC, then when I'm ready to use the robot, I download the compiled program to the robot, which stores it in memory."

The robot, which "at first looked more like a Star Wars walker than a dinosaur," went through many versions of hardware. "A lot of work went into it before I got something that worked," Mr. Dilworth remembers.

After four years of tinkering, walking came dramatically. "In one and a half weeks the robot went from standing and lifting one leg in the air for a half second to walking around my desk. I was on an adrenaline high," Mr. Dilworth said. "Now I know how to do it, I think. Finally!"

The work is funded by the Leg Lab. For more information, go to their web site.