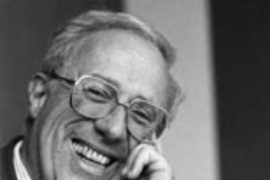 Dertouzos, who had a rare gift for putting complicated technology into human terms and making it accessible to non-technical audiences, died on August 27 at Massachusetts General Hospital. He was 64.

Dertouzos was buried next to his parents at First Cemetery in Athens, where he was born and raised. Personal letters from MIT President Charles M. Vest and Microsoft founder Bill Gates were read at a dinner in Dertouzos's honor Tuesday night, sponsored by Athens College.

A memorial service will be scheduled at MIT.

Dertouzos joined the MIT faculty in 1964 and became director of LCS in 1974. Under his leadership, LCS became one of the largest research labs at MIT with 400 faculty members, graduate students, and research staff. LCS dedicated itself to the invention, development and understanding of information technologies, always within the context of their human utility.

"We made a big mistake 300 years ago when we separated technology and humanism," Dertouzos said in an interview in Scientific American. "It's time to put the two back together."

President Vest said, "Michael was larger than life. He was at once a leader, builder, visionary and caring human being. Few individuals have so personally and profoundly shaped their institutions and professional fields. Yet he did so in a manner that respected and involved all of his colleagues. I will miss his personal friendship and counsel very much."

"Michael was a leader in every sense of the word. He knew how to motivate people; he was passionate about his work and passionate about the people he worked with. For many of us, this is more like losing a family member than losing a colleague," said John V. Guttag, head of the department of electrical engineering and computer science at MIT.

LCS members and alumni have been instrumental in the development of numerous innovations, among them time-shared computers, RSA encryption, the X Window system, the ArpaNet and the Internet. Most recently, LCS spearheaded the $50 million Oxygen project in 1999 in conjunction with MIT's Artificial Intelligence Lab. Oxygen is intended to make computers easier to use, "as natural a part of our environment as the air we breathe."

Zue commented, "Michael fervently believed that developing technology is not enough by itself. One must also strive to demonstrate that it is good for something. Under his stewardship, LCS has been mindful of balancing technical excellence with social relevance."

The Lab is currently the North American home of the World Wide Web Consortium (W3C), an open forum of companies and organizations that helps promote the Web's evolution and ensure its interoperability. Dertouzos was instrumental in bringing the W3C and its director, Tim Berners-Lee, inventor of the World Wide Web, to LCS.

Berners-Lee said, "If it hadn't been for Michael, there would not probably have been a World Wide Web Consortium. He was a spring of enthusiasm, capability, insight, and experience which drove a half-formed idea of W3C into an international reality. Ever since, Michael's strength of leadership, clarity of thought and warmth of heart have been a constant support and nourishment and inspiration. He will be dearly missed."

In the LCS director's statement, Dertouzos wrote with characteristic enthusiasm for human progress through technology: "We feel extraordinarily privileged to have a hand in shaping the Information Revolution -- the third major socioeconomic movement of our world.

"But our quest goes beyond utilitarian increases in human productivity to the broader ways in which information can help people. We find ourselves in the junction of two interrelated challenges: Going after the best, most exciting forefront technology; and ensuring that it truly serves human needs. It is this mixture of forefront technology and human utility that is the hallmark of LCS research."

Professor Harold Abelson of electrical engineering and computer science, who co-authored a paper with Dertouzos, said: "Michael was a leader of mythic proportions, both at MIT and worldwide. Much of what we take for granted in computing at MIT -- including Project Athena and the World Wide Web Consortium -- is a direct result of his leadership, his vision, and his entrepreneurial skill." Dertouzos played a key role in creating Project Athena, which he suggested be named after the Greek goddess of wisdom.

Stephen A. Ward, a professor of electrical engineering and computer science at LCS and a former doctoral student of Dertouzos, said, "Michael Dertouzos brought a unique combination of intuition, humanity, and style to our faculty. Michael's impact on MIT and his mentorship of students and colleagues stand as an indelible monument to his leadership, vision and personality. He will be remembered as one of the greats of MIT and computer technology."

Dertouzos, whose father was an admiral in the Greek navy and whose mother was a concert pianist, was raised in Greece. His earliest memories were of war-torn Athens and of people starving in the streets, an experience that deeply affected him for the rest of his life.

As a teenager, Dertouzos dreamed of going to MIT, but when he won a Fulbright scholarship it was to the University of Arkansas, where he earned the BS and MS degrees. After selling soft drinks and working with shaft-angle encoders at Baldwin Piano, he applied to the MIT doctorate program. Upon receiving the Ph.D. in electrical engineering in 1964, he joined the faculty as an assistant professor and became a full professor in 1973.

True to the MIT spirit of innovation and entrepreneurship, Dertouzos holds patents on a graphical display system, an incremental photoelectric encoder, a graphic tablet, and on a parallel thermal printer.

A PROLIFIC AUTHOR ON HUMANS AND COMPUTERS

Dertouzos is the author of eight books. His latest, "The Unfinished Revolution: Human-Centered Computers and What They Can Do for Us" (HarperCollins), published this year, introduced the concept of "human centered computing." Computers, he wrote, should serve people, not the other way around. Today's machines are overloaded with excessive features, inadequately address our needs, and demand too much of our attention, he declared.

"Michael argued eloquently for human-centered computing. He thought deeply about how information technology could help everyone, not just the technical elite," said Guttag.

In the best-selling "What Will Be" (HarperCollins), published in 1997 when the Internet was first beginning to take hold, he wrote about the many ways in which information technology would transform our lives.

In 1986, Dertouzos was asked to chair the MIT Commission on Industrial Productivity, to examine why US firms were losing competitiveness to their overseas industrial rivals. The result was "Made in America," co-authored by Richard K. Lester and Robert M. Solow (MIT Press), which became one of the most influential business books of the 1980s, with over 300,000 copies in print.

"Michael's books were one example of his educational skills. He was fearless in entering the arena of other pundits attempting to forecast the future of computers and their application. Among his colleagues he was known for his concern for the big picture," said Fernando J. Corbatï¿½ï¿½ï¿½ï¿½ï¿½ï¿½, professor of electrical engineering, emeritus, at MIT, and the inventor of time-shared computing.

AN EYE TO THE FUTURE

An avid sailor and woodworker, Dertouzos spent much of the past quarter century studying and forecasting future technological shifts -- in describing, for experts and ordinary citizens alike, what could be. In 1976, he predicted the emergence of a PC in every 3-4 homes by the mid-1990s. In 1980, he first wrote about the Information Marketplace, a vision of networked computers that has transformed the world economy.

An eloquent speaker, who was admired for his integrity and his disdain for hype, Dertouzos was frequently sought out by the media, industry and government agencies for his expertise and insight on the relationship between computers and their human users.

During the Carter Administration, Professor Dertouzos chaired a White House advisory group that redesigned the White House information systems. In 1995, he represented the US in a delegation to the G7 Conference on the Information society. In 1998, he was co-chairman of the World Economic Forum on the Network Society in Davos, Switzerland.

"Michael had a broad understanding of technology and a teacher's knack for explaining ideas. One direction in which this shone was his skill in interfacing with government sponsors of research. He was skillful in evoking the best research ideas from within the laboratory; he could educate without being condescending," Corbatï¿½ï¿½ï¿½ï¿½ï¿½ï¿½ said.

In his final interview, printed in the August 22 issue of the Chronicle of Higher Education, Dertouzos spoke about the qualities that he most valued in teachers, qualities which were a fundamental part of his own approach to his interactions with the MIT community:

"Don't forget the impact that love has on education," Dertouzos said in explaining his skepticism of computer-based distance education. "If you are loved by your teacher -- and I mean this in the most innocent and Platonic sense -- if your teacher really cares for your well-being -- and you know that because your teacher will ask about you, will scold you for not doing the right thing, and will give you stories about why you should do this or do that -- the learning can be unbelievably different."

Dertouzos, a resident of Weston, married Hadwig Gofferje in 1961. They divorced in 1993. In 1998 he married Catherine Liddell, who survives him along with his two children, Alexandra Dertouzos Rowe and Leonidas M. Dertouzos of Boston, and a granddaughter, Kiera Ann Rowe.

A funeral service will be held in Athens on September 4th, followed by a memorial service at MIT. In lieu of flowers, donations may be sent to Athens College, 342 Madison Avenue, Suite 16161, New York, NY, 10173.