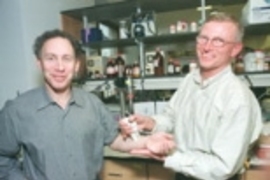 CAMBRIDGE, Mass--The familiar prick of a needle for drawing blood could eventually be history, MIT researchers and colleagues hope. The team will report in the March issue of Nature Medicine the first human tests of a noninvasive technique using sound that can painlessly extract a number of important molecules through the skin.

The work is of special interest to diabetics, who currently should draw blood at least four times a day to test their glucose levels. The clinical trial described in Nature Medicine used the new technique to successfully monitor glucose levels in seven volunteers with type 1 diabetes.

"We're hopeful that this could eventually be a universal way of noninvasively sampling a variety of substances from humans," said Robert Langer, the Kenneth J. Germeshausen Professor of Chemical and Biomedical Engineering at MIT and an author of the paper. "Blood tests for any number of things, such as cholesterol and bilirubin, could someday be replaced with this technique."

The researchers expect that the first application will be a portable device for noninvasively monitoring glucose. The device could be available in three to five years, and "should be comparable in price to the glucometers diabetics currently use to test glucose levels," said coauthor Joseph Kost, a professor at Ben-Gurion University in Israel and an MIT visiting scientist.

Earlier work reported in the journal Science by Professor Langer, MIT Professor Daniel Blankschtein of chemical engineering, and some of the same researchers on the Nature Medicine paper showed that the technique can also be used in reverse: drugs such as insulin can be delivered through the skin via ultrasound (the work in the Science paper focused on animal models and skin from human cadavers).

As a result, "this approach could be further developed to combine the sensing and delivery parts into one design (wristwatch or patch)," the researchers write in Nature Medicine.

Coauthors of the paper are Professor Samir Mitragotri (MIT PhD 1996) of the University of California, Santa Barbara; Professor Robert A. Gabbay, MD, director of the diabetes program at the Milton S. Hershey Medical Center at the Pennsylvania State University College of Medicine; and Professor Michael Pishko of Texas A&M University (formerly an MIT postdoctoral associate in Professor Langer's lab). The clinical trials were held at Beth Israel Deaconess Medical Center in Boston and the MIT Clinical Research Center.

The new technique relies on ultrasound. Professor Langer explained that the outer layer of skin is composed of dead cells and fatty layers arranged like bricks and mortar, respectively. Ordinarily that barrier is almost impervious. Ultrasound, however, disorganizes the fatty layers, creating pathways for molecules to travel through. It increases the permeability of skin by several orders of magnitude.

In the clinical trial and in tests on rats and on skin from human cadavers, the researchers applied ultrasound to the skin for two minutes. (Professor Kost said that in a current clinical trial they are now down to half a minute.) The ultrasound frequency used was 20 kHz, which is much lower than the frequency used to visualize babies in the womb.

They specifically inserted the ultrasound probe into a small glass cylinder affixed to the skin and containing a soap solution. After the ultrasound treatment, they put saline solution into the cylinder and applied a vacuum to it for five minutes to extract a very small amount of fluid from the interstitial spaces surrounding the cells. This fluid is not blood, but is known to have the same concentrations of glucose and other substances as in blood.

Professor Kost notes that skin permeability remained high for about 15 hours after an ultrasound treatment. As a result, he envisions that one day diabetics, for example, could apply ultrasound in the morning, then put a patch on the pretreated site. "The patch would have sensing capabilities and a display showing the glucose levels, and alarms if those levels go out of a safe range." (Professor Kost said that in the future a vacuum won't be necessary for extraction.)

Volunteers reported no pain during the procedure. The experiments also indicate that ultrasound does not damage the skin, although the researchers note that "further studies assessing safety (especially the effect of repeated extractions) will be required."

In the Nature Medicine paper, said Professor Langer, "we report the clinical feasibility and safety of this ultrasound approach." With further work, the researchers expect significant improvements. For example, the ultrasound sonicator is already getting much smaller than the laboratory sonicator used in the Nature Medicine studies. "We expect a battery-powered device about the size of a cigarette pack," Professor Kost said.

Professor Langer said that eventually the technique could make drawing blood obsolete. He noted, however, that the detection of some substances requires a larger sample than the ultrasound extraction can currently provide. As analysis techniques for these substances get better, however, that should change. In addition, the technique currently requires one blood sample before the ultrasound treatment for calibration. Professors Langer and Kost say that eventually this, too, will be unnecessary.

Since 1988 Professor Langer and colleagues have received a series of patents related to this work that are currently licensed by the company Sontra Medical. Sontra, in turn, is developing a second generation of ultrasound units for this application. The company is also running a third clinical trial (a second trial was recently completed), said Professor Kost, who is a scientific advisor at Sontra.

The ultrasound technique could make life easier for many. Professor Langer remembers when his son, then four, had to get blood taken. "He ran around the MIT infirmary for over an hour because he was so scared," he said.

With the new technique, perhaps future little boys will simply have to sit still.

The work is sponsored by the American Diabetes Association, the Juvenile Diabetic Foundation, the United States-Israel Binational Science Foundation, and the US Centers for Disease Control.