Ski team waxes and rolls its way to first place 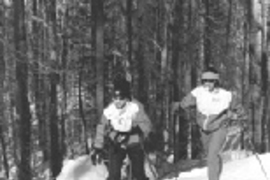 When a college-age woman talks about waxing, she's usually not referring to her skis. Not so for Jessica Kleiss, who took the #1 slot in cross-country skiing last month at the US Collegiate Skiing Championships.

The Minnesota native spends a lot of time thinking about ski wax.

"It makes or breaks the race," said Ms. Kleiss, a senior in mathematics and atmospheric science. "You've got to be strong, have good technique, and know the chemistry and physics behind ski wax. It's materials science."

Her coach agrees. "There's a whole art form to getting the wax right," said David Currie, a software engineer who coached MIT's women's and men's cross-country ski teams this year, helping them take first and fourth place respectively at the division championships in Bretton Woods, NH on March 8-11.

Seven of the 10 students on the two teams hail from Minnesota, where cross-country skiing is a big sport. Ms. Kleiss competed in high school on a team of 40 women. "We don't have mountains; we have lots of prairies and lots of snow," she said.

The small but dedicated group of skiers recruited their own coaches and practiced together even before they found a coach. In Massachusetts, cross-country skiing is generally a recreational rather than competitive sport. Finding and keeping a qualified coach isn't easy.

Coach Currie, a Canadian skier who moved to the Boston area in December, contacted the MIT team captain -- biology junior Derek Southwell -- looking for other skiers. Mr. Southwell recognized a potential coach and put Mr. Currie in touch with MIT's athletic department. Before that, George Kocur, a senior lecturer in civil and environmental engineering and an avid skier himself, was coaching the team. He drove them to roller-ski races and accompanied them to January training camp in Quebec.

"George has been our advocate," Mr. Southwell said of Dr. Kocur. "He's really interested in making sure we have the opportunity to ski."

Four evenings a week during ski season, the team climbs into a van and heads out for practice on the Weston Golf Course, which makes snow to provide a track. On weekends they travel to competitions, which are never held around here; there's not enough snow.

In an effort not to let the "grueling" schedule interfere with their academic workload, team members usually carry books and often do homework on the van.

"We were the only team at meets with skiers carrying laptops," said Dr. Kocur.

Among the schools competing against MIT in the championships were Army, Cornell, Yale, Colby-Sawyer, Skidmore and St. Olaf, which earned the #2 women's ranking.

Ms. Kleiss and her teammates keep up their training off-season by running and lifting weights, as well as workouts on roller skis, which are short skis with two wheels at each end. The team often went to Arnold Arboretum to take advantage of the paved hilly paths. (Anyone thinking of trying this on his or her own should be forewarned -- roller skis have no brakes.)

Cross-country skiers compete in two categories: classic and freestyle. The classic style uses long skis similar to recreational cross-country skis and relies on the traditional sliding motion in a track ("like a Nordic Track machine," said Ms. Kleiss). These skis are bowed, so the middle portion under the foot doesn't touch the snow unless the skier stomps her foot down hard.

Freestyle, which is more commonly referred to as "skating," uses shorter skis and a movement similar to ice skating or rollerblading. The feet are held in a "V" and one foot pushes off while the other glides.

Special ski wax gets the skis ready for the course and the conditions. Fresh powder or "old, wet or icy snow all require different wax," said Ms. Kleiss, who said she's just now beginning to figure out the waxes. She, like the rest of the team, relies on Coach Currie's expertise.

In a classic race, the track may be 15 kilometers with 500-foot hills. The wax on the skis gives racers the traction they need to get up a hill and the glide they need to work up speed on the flats.

The tips need a gliding wax, and a sticky wax goes in the bow of the ski. When the skier is gliding, the wax at the tips reduces friction. But when the skier needs to make it up a hill, she makes a stomping motion with each step, flattening out the ski so the sticky wax makes contact with the ground. That wax, called "klister" (the German word for glue), provides the traction necessary to climb the grade.

The team's wax selection fills two toolboxes that members carry to meets and practices. They also carry a blowtorch, because knowing which wax to use isn't enough. Skiers have to know how to apply it, and for klister, that means using a blowtorch to heat it and smooth it on evenly.

Freestyle doesn't require a sticky wax, just a glide, and that's Ms. Kleiss's real strength. At the championship meet, she came in first in the freestyle race and fourth in the classic. Teresa Hung, a sophomore in brain and cognitive sciences, came in 18th in freestyle and ninth in classic, and freshman Jessica Baker took sixth in freestyle and 18th in classic. The team took first place in the relay race.

"Jessica was the leader of the bunch," said Mr. Currie. "She won skating races consistently and was usually in the top three or four in classic. She's a very powerful skier who has gotten progressively better. This was her pinnacle year."

"My senior year in high school, the team was top in the state," said Ms. Kleiss, who plans to do weather research in Minnesota after graduation. "Now, in my senior year, the college team won nationals. So I feel great about that -- a big bang of success at both ends."

Still, she said it's nice that the ski season is over. Why? Because she can play on the women's rugby team now -- something she couldn't do before for fear of hurting herself and her ski competition chances.

A version of this article appeared in MIT Tech Talk on April 12, 2000.