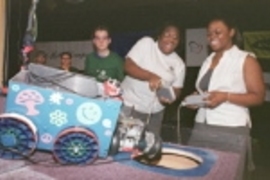 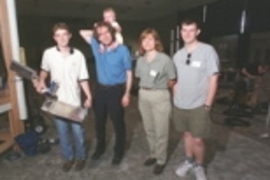 The 30th anniversary of Design 2.007, MIT's annual mother of all robot contests, transformed the Johnson Athletic Center into a mission to Mars on May 8 and 9.

This year's contest, named "Sojourner This! Y2K'd" aka "MechaImpactageddon," included 140 students in 2.007 (Introduction to Design and Manufacturing) as well as several alumni/ae who had won the contest in previous years.

The other winners of "Sojourner This!" were Michael Roberts, a sophomore in mechanical engineering, and Albert Leija, a junior in electrical engineering and computer science.

The class begins in February when each student is given "The Kit," a green rubber bin containing more than 200 items, and challenged to build a machine for the contest. The course culminates in the two-night elimination round tournament.

"Sojourner" was the name of the little rover that explored Mars in 1998. "We named the contest before NASA started losing stuff," quipped Roger Cortesi, a teaching assistant for 2.007 and a designer of the contest. "This was meant to be a tribute to NASA. Now it's gentle mockery."

To compete in "Sojourner This!" each robot had to collect "Mars rocks" in the form of pink or blue rubber balls and hockey pucks, dump the objects into a bin, and ward off attacks by the opposing robot. An "asteroid" with a Darth Maul face, if captured and dropped into the home bin, was worth 10 points and often made a victory decisive.

Alexander H. Slocum, a MacVicar Fellow and professor of mechanical engineering, emceed both three-hour events. His wardrobe for the occasion included a Dilbert and Dogbert tie, Panama hat and measuring-tape suspenders.

Alex d'Arbeloff (SB 1949), chairman of the MIT Corporation, and Brit d'Arbeloff (SB 1961, SM) opened the event's final round with enthusiastic comments about the role of the 2.007 contest in engineering education at MIT.

"This contest has lasted for 30 years because it has great meaning. This is what engineering and being an engineer really is," said Mr. d'Arbeloff.

Neil Pappalardo (SB 1964), who provided the funds to build and endow the Pappalardo Laboratory, spoke to the crowd after a musical interlude featuring the Chorallaries. "This contest is the first opportunity for sophomores to create something that's never been made before. It's important for all of us to know MIT has contests like these, not because this particular design will help society. But one day, the thing you create will help society," he said.

Crowd-pleasing machines included a spider-bot, complete with ominous black tinsel body, striped legs and creepily arachnoid motion; a Lazy Susan death-spinner; a lounge chair that ran amok; a long metal arm with a back and blue glove designed to sweep "rocks" into the bin; and a paddle-wheeler built to dig hungrily into the rock pile and kick balls towards home bin like a dog in search of a bone.

Receiving quick and enthusiastic applause were The Claw, an elegant silver pincer; Lady K, a jaunty hand-painted bulldozer-gatherer; and The Harvester, a solid gold thresher.

In general, the rover-like machines did less well than their NASA role model on Mars. More successful were those machines that combined shoving piles of "Mars rocks" into the driver's home bin while deploying something -- anything -- to stop rocks from rolling into the opponent's bin.

Mr. Lang's defensive design was uniquely effective: his cone-shaped copper wire basket beat out a V-chip design by Oren Bernstein, a sophomore in mechanical engineering, as well as the weighted manhole-cover approach used by others.

Mr. Lang's look of stunned elation over his victory gave way to shock as Professor Slocum picked him up and ran three circles around the arena.

"This is more fun than snow-boarding underwater in scuba gear," Professor Slocum said of the contest.

Mr. Arguelles also won a giddily ruthless, super-final round against Mr. Lang. Mr. Arguelles's machine featured a sleek, ominous claw that fended off attacks, flipped the defensive basket out of its hole and trapped the high-scoring asteroid.

Whether they built machines or simply watched "Sojourner This!" the past winners of Design 2.007 spoke as one on the value, not to mention the thrill, of the contest.

"It's the purest form of design you will ever experience. It changed my perception on engineering and design, as well as my own ability and confidence," said Aaron G. Flores (SB 1991, SM, PhD), winner of "Not in My Backyard" in 1989.

Commenting on "Sojourner This!" just before the final rounds, Mr. Massie noted that three things had changed since he took the course and won the contest in 1993.

"The kits are much better, the machine shop is awesome, and someone has tried to reduce the stress of the contest by impounding the machines before the event," he said.

Preparing for their return contest entry this year, the Massies enjoyed the first two changes and defied the third.

"We opened the kit and started work on Friday, three and a half days before the contest. Since then, we've expended all our babysitting budget and the goodwill of our friends. We wanted that complete MIT experience -- intensity, but no all-nighters," he said.

Then came their first viewing of the students' machines, followed by the first round of competition. The Massies' silvery one-armed rock-sweeper, cutting its fierce, circular path through the blue and red balls, had to change or die, Mr. Massie decided. After seven years and one vow of "never again," he stayed up all night.

"It was still less stressful than being an undergraduate," he said.

As the cavernous room emptied and Mr. Massie and his family prepared to leave, he added, "It's funny -- the moment I remember best from the year I won is my advisor saying to me just before the contest, 'Take a deep breath. Recall this moment.'"

The MIT Band commented instrumentally on the action with jazzy versions of YMCA, Louie Louie, Surfin' USA, It's So Easy to Fall in Love, Another One Bites the Dust and the theme from Jaws.

As in previous years, eight students will proceed from 2.007 to the International Design Contest (IDC) in South Korea, sponsored this year by NHK television in Japan. The IDC works like 2.007, except the designers work in teams made up of representatives from diverse countries. Their surest (and often only) common language is physics, Professor Slocum noted.