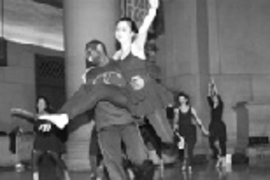 ↓ Download Image
Caption: Olufemi Omojola, a graduate student in computer science, holds Nia Jetter, a senior in mathematics, as they complete a dance in Lobby 7 with their troupe Movements in Time during Campus Preview Weekend.
Credits: Photo / Donna Coveney 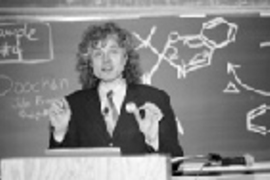 Caption:
Olufemi Omojola, a graduate student in computer science, holds Nia Jetter, a senior in mathematics, as they complete a dance in Lobby 7 with their troupe Movements in Time during Campus Preview Weekend.
Credits:
Photo / Donna Coveney

Professor Steven Pinker entertained prefrosh with an aspirated series of squeaks, hums and pops intended to get newly admitted students thinking about language.

"Language comes so naturally that it's hard to realize what a strange and miraculous thing it is -- squeaks, hums and pops in aspiration. If I made a slightly different series of squeaks and pops I could get you to think about theories of the origin of the universe or your favorite soap opera," said the professor of brain and cognitive sciences, who is widely known for his popular books on mind and language.

His latest book, Words and Rules: The Ingredients of Language, was the subject of the Friday afternoon talk in Rm 10-250.

At the same time, Professor of Humanities Henry Jenkins was entertaining the remainder of the 700 prefrosh at a lecture on "Popular Culture and Media Convergence: An MIT Humanities Education for Our Emerging Digital World" in Rm 26-100.

During the three-day Campus Preview Weekend ending Saturday, the high school students who have been admitted to MIT's Class of 2004 were welcomed with a series of special events designed to encourage them to choose the Institute over other colleges.

Special tours showing off the the campus, UROP, athletic facilities and fraternities, sororities and independent living groups -- as well as dinners, parties, arts performances and lectures -- gave the prefrosh, many of whom have wide-ranging academic and extracurricular interests, a taste of the diversity on MIT's campus.

Plans to have prefrosh wear purple wristbands for identification and sign a contract stating they would not leave campus during the weekend were scrapped early Thursday morning after student groups protested the measures.

Language works by two "tricks," said Professor Pinker -- memorized words, which he referred to as "slaves to the memories of a community," and combinatorial grammar. "The number of combinations grows exponentially with the length of a sentence," and the average person can understand "100 million trillion sentences of 20 words or shorter in length," he said.

Professor Pinker said there is no maximum for sentence length, although the Guinness Book of World Records notes that William Faulkner holds the record with a 1,003-word sentence that begins: "They both bore it as though in deliberate flagellant exultation..."

The design of human language is imperfect, proof being the many exceptions to the rules, particularly in verb and noun endings, Professor Pinker said. Regular verbs have predictable declensions that don't have to be memorized (laugh, laughed, has laughed; walk, walked, has walked; carry, carried, has carried). Their regularity makes it easy for speakers to attach the correct ending, even if the word is new. For instance, he said, the prefrosh could all figure out the past tense of diss or mosh.

Irregulars, the "quirky, unpredictable" side of the family, have to be memorized and because of that, only frequently used verbs fall into that category; we use them enough to keep track of the endings. English contains about 165 irregular verbs and 4,000 regular.

The 10 most frequently used verbs are irregular, including to be, to have, to go and to take, he noted.

When asked if there are languages that don't follow the patterns outlined in his book, he answered, "I hope not."

A version of this article appeared in MIT Tech Talk on April 12, 2000.