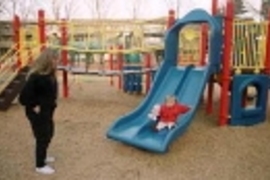 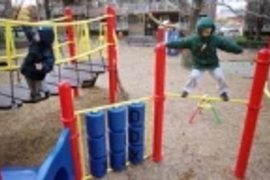 The small residents of Westgate Apartments won't be climbing the walls this winter. Instead they'll be enjoying new playground equipment designed especially for them to climb, swing, crawl, slide and jump around on.

The brightly colored new playground, nestled in the courtyard of the four low-rise buildings of Westgate on Vassar Street, has three separate structures appropriate for the skill levels of toddlers, two- to five-year-olds and chil-dren over age five. Resting on a spongy turf of sand covered with a mulch of pressed hardwood, the three giant jungle-gyms have swings for all ages and a sandy area equipped with tiny earth-moving arms the children can operate. The older children's area even has a section called the "Ground Zero U-bounce," an apt name for an MIT toy.

"We met with two companies who submitted bids and told them what we had in mind for our kids and what they liked about the old playground," said Jackie Janibagian, a Westgate resident who lives with her husband, Curtis Smith, a graduate student in nuclear engineering, and their four children, aged nine months to eight years. "My kids can't wait to get out there and play around on the toys," she said.

After a six-week construction period, the playground opened last Thursday evening with a party. The new playground has been in the works for about two years, according to Dennis Collins, manager of Westgate Apartments and Tang Hall, who said the 15-year-old pressure-treated wood structure needed to be replaced. "It was starting to fail. Children were getting splinters and it just wasn't up to present codes," he said.

The new structure meets the highest codes, even the standards of the American Disabilities Act -- it's handicapped accessible. The $100,000 playground, made of metal posts with stainless-steel bolts and vinyl-covered metal decks, came with a 100-year warranty, said Mr. Collins.

Westgate houses 210 graduate students and families, including 120 children, in four low-rise and one 16-story high-rise building. The Technology Children's Center daycare operates a satellite classroom in the apartment complex.

A version of this article appeared in MIT Tech Talk on November 22, 2000.