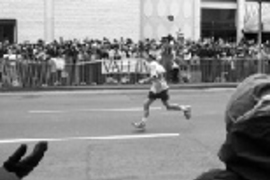 ↓ Download Image
Caption: Sophomore Dan Feldman placed 62nd out of nearly 18,000 runners in the Boston Marathon. Mr. Feldman said that when this photo was taken near Lord &amp; Taylor on Boylston Street, "all I could think about was, 'get me to the finish line.'"
Credits: Photo / Liyan Guo

Caption:
Sophomore Dan Feldman placed 62nd out of nearly 18,000 runners in the Boston Marathon. Mr. Feldman said that when this photo was taken near Lord &amp; Taylor on Boylston Street, "all I could think about was, 'get me to the finish line.'"
Credits:
Photo / Liyan Guo

Nineteen-year-old sophomore Daniel Feldman came in 62nd overall out of 17,813 registered runners in the 104th Boston Marathon on April 17. He was the youngest of the top 100 finishers in the 26-mile race.

"I wanted to do a little better," said Mr. Feldman. "I was trying to keep the lead ladies in sight, but they left me in their dust after about 15 miles."

Sophomores Jenny Schymick and Caitlin Gaffey ran the race as "bandits" -- unregistered runners who jumped in at the starting line. Ms. Gaffey completed the race in about 3:51, Ms. Schymick in 4:29. (The first-place woman runner, Catherine Ndereba, finished in 2:26.)

To qualify as an official entrant, a runner for the men's open division must have run a previous marathon in 3:10 or less; qualifying time for the women's open is 3:40.

Mr. Hu qualified by running the Atlanta Marathon on Thanksgiving Day, a course he described as "tougher, with more uphills. Boston has a net drop, and more crowds to help. There's nothing like the feeling of having hundreds of thousands of people along the course cheering," he said. "Boston is the marathon to run. How many other states have a Marathon Monday?"

"It's one of those things that sounds neat and you just always want to try," said Ms. Schymick of her decision to run. "There were little kids standing with their hands out to high-five you as you run by."

"It wasn't so bad for most of the way," said Mr. Feldman. "But at a certain point, you start burning fat; that's when it gets difficult. For me that was at mile 22, near BC, and that was the beginning of the end. From then on I was jogging because that's all I could do."

Four days after the race he was still sore. "Stairs are difficult," he said. "It's one long way from Hopkinton into Boston."