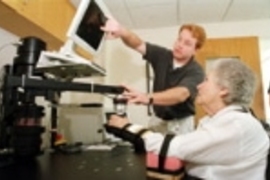 An MIT robot continues to prove its worth in the physical therapy of stroke victims. In the May 23 issue of Neurology, researchers report the results of a second clinical trial in which the robot significantly improved patients' recovery of arm movement.

The trial, which involved 56 patients, "confirms the results of our earlier work. It's evidence that this isn't just an accident," said Professor Neville Hogan, who holds appointments in MIT's Department of Mechanical Engineering and Department of Brain and Cognitive Sciences.

Some 700,000 US citizens suffer strokes every year. Of these, some 500,000 require therapy for problems with language, memory or movement. The MIT robot focuses on the last of these. Currently it conducts therapy of the arm, but the researchers are creating additional robots for therapy of the legs and wrist/hand. They are also running two additional clinical trials and hope to begin a third later this year.

Dubbed MIT-Manus for the link between its general therapeutic focus and MIT's motto, "mens et manus" (mind and hand), the robot has been in development for about 11 years (see MIT Tech Talk, March 16, 1994; May 20, 1998; and November 24, 1999). Professor Hogan stresses, however, that "we don't want to replace human therapists, and I don't think we ever could. Rather, we'd like to provide a tool to increase their productivity."

Indeed, according to Dr. Hermano Igo Krebs, the MIT research scientist in mechanical engineering who led both clinical trials, patients who have used the device "felt comfortable during the robot therapy, enjoyed it and wished to continue, but when asked in a questionnaire to choose whether they'd rather work exclusively with the robot or a human, they invariably chose the human."

"I think it has to improve its bedside manner," quipped one patient to Dr. Krebs.

In the robot-aided therapy, a person sitting at a table puts the lower arm and wrist into a brace attached to the arm of the robot. A video screen prompts the person to perform an arm exercise such as connecting the dots. If movement does not occur, MIT-Manus moves the person's arm. If the person starts to move on his own, the robot provides adjustable levels of guidance and assistance to facilitate the person's arm movement.

The clinical trial reported in Neurology lasted close to three years. In it two groups of stroke patients received standard therapy. The 30 people in the experimental group received an additional daily hour of robot-aided therapy. The others received "sham" robot therapy for one hour a week; they were exposed to the robot but it didn't guide them through exercises. (They moved the robot manually, using their good arm to guide the disabled arm to perform exercises.)

Scores for tests measuring increased movement were twice as high for patients in the experimental group as for patients who received "sham" therapy. In addition, this time the researchers also showed a small but statistically significant benefit of the robot on a patient's overall function. Function is defined by things such as how well a patient can groom himself, and by more affective things like whether the patient is depressed.

The researchers continue to study MIT-Manus and its application to stroke therapy. In January 2000 they initiated a third clinical trial at the Spaulding Rehabilitation Hospital in Boston. The purpose of that trial, said Dr. Krebs, is to "see if stroke recovery is limited to a central nervous system reorganization, and if it can be influenced by more peripheral systems. For example, could strengthening the muscles help recovery?"

In another trial underway at Burke, the researchers are trying to determine what is happening during recovery. "We think the brain is relearning how to coordinate movement," Professor Hogan said. "There are certain signatures associated with this kind of learning; in the Burke trial we're trying to see if those signatures are present in robot-trained patients."

The robot is also being used in an experiment exploring the effect of amphetamines on the recovery of stroke victims. "Work elsewhere has shown that exercise combined with amphetamines causes animals with strokes to get better than if either therapy is used alone," he said.

MIT-Manus is being used not only to deliver daily therapy one hour after oral drug delivery, but also as a measuring tool. The robot can quantify forces and movements that until now have been judged by "touch and feel." Results so far indicate that small doses of amphetamines combined with exercise do indeed enhance recovery, Professor Hogan said.

The researchers envision several additional applications for the robot, many of which "have promise to impact health-care costs," he said.

For example, the device could help doctors prescribe the optimum therapy for a new patient. By comparing data from the new patient with the records of previous patients, "they can get a better sense of where the new patient stands," Professor Hogan said.

MIT-Manus could also become an important teaching tool. "You could record how a skilled neurologist performs a given procedure on a mannequin, then replay it for trainees," he said. The machine could repeat the exercise, for example, while a trainee physically follows the movements with his hands over the mannequin's wrist and hand.

The data recorded by the robot could also be sent over the Internet, linking a therapist in a small town with a specialist in Boston, for example. With robots in both offices, the two people could work together to solve a particularly perplexing problem by transmitting the actual "touch and feel" of the patient. In addition, the researchers are working on home-based robot therapy supervised by a clinician via the Internet.

MIT-Manus cannot be found on the MIT campus. "You'd expect that I'd have one down the hall in my lab," Professor Hogan said. "But the idea is to get this into clinics. The more clinical experience you get, the sooner you find out what works and what doesn't." To that end, "we're always looking for additional collaborators," he said.