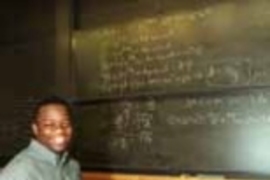 Graduate student Eric Brittain is designing a system to make it easier for students in classrooms to communicate in real time with their instructors during lectures.

Using a small, wireless device Mr. Brittain calls the Classroom Communicator, a student will be able to signal the lecturer that he is confused or has a specific question. Putting the shoe on the other foot, an instructor could plan to send out a quick multiple-choice question over the device at a certain point in a lecture to see how well the students are following.

"During my years as a student, I've been in classroom situations where I've wanted to ask a question, but I've been hesitant," said Mr. Brittain, a graduate student in electrical engineering and computer science (EECS). "I often envisioned a system where the student could ask a question, possibly anonymously, and the professor could receive the question without the student feeling like he has asked a stupid question."

"With the Classroom Communicator, if a professor knows over half the students are lost, then he or she can address the problem by soliciting questions. If a student has a question, he or she can push a button and continue taking notes, without waiting to be identified by holding his or her hand up," he said.

Each student project received a grant of $60,000 per year for two years, contingent upon progress. Faculty projects are funded at $500,000 per year for two years with the ability to renew for a third year. Project I-Campus also funded three projects initially that are due for completion in February -- the electronic Shakespeare archive, the global classroom of the Singapore-MIT Alliance, and an aeronautics/astronautics program for distance collaboration in design courses.

Mr. Brittain's project is run by a student group called the Educational Technologies Group comprising a seven-member executive board, six UROP students, faculty advisor Professor Albert Meyer of EECS and other advisors from MIT and Microsoft. For more information on the project, see the web site at <http://web.mit.edu/etg/www>.

Another student project, the Interactive Introduction to the Institute (Intro), was created to provide freshmen with information on the living opportunities at MIT using web-based and CD-ROM technologies.

"Incoming students are confronted with too many living options," said Vikash Gilja, a sophomore in brain and cognitive science who leads the Intro project. "When they look at rush books, all they see is the same information. Our goal is to capture the individuality of each living group and provide incoming freshmen with as much information about MIT as possible."

Intro will include housing information, a tour of the residence system and a video introduction to the campus. It will also feature instant messaging and chat, and provide dynamic feedback. In addition, each living group will have its own page.

The other two student projects are "A Cryptographically Secure Successor to the MIT Card," run by Chris Laas, a senior in EECS; and "Project View," run by Ashok Chander, a senior in biology, and Tuan Phan, a junior in management.

Project I-Campus invites preliminary proposals for new projects for educational improvement and change, including proposals from student groups, as part of a joint call for proposals to be issued later this week by the Council on Educational Technology and the Committee on the Undergraduate Program. Proposals will be due in late January.

(Patricia Richards, director of communications for the Laboratory for Computer Science, contributed to this article.)

The Council on Educational Technology and the Committee on the Undergraduate Program will solicit preliminary proposals for 2001-02 education grants in a letter to be mailed to the MIT community later this week. Completed preliminary proposals will be due on January 22. Although the d'Arbeloff and I-Campus grants (see story on this page) are intended primarily for faculty-led initiatives, preliminary proposals may come from any member of the MIT community. There is also a special category of funding under iCampus reserved for student-led initiatives. Detailed information and instructions will appear later this week at http://web.mit.edu/ed-proposals.