Merits of teaming capitalism and democracy discussed at colloquium 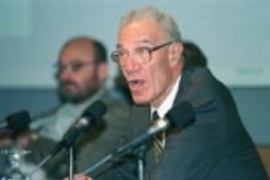 Joshua Cohen, the Arthur and Ruth Sloan Professor of Political Science, opened the fourth and final session of the School of Humanities, Arts, and Social Sciences anniversary colloquia in Wong Auditorium. The panel question was, "Are capitalism and democracy good for each other?"

"When this school was founded in 1950 at MIT, it wasn't uncommon to think that the experience of the previous 30 years -- depression, fascism, communism and world wars -- had demonstrated the irreconcilability of capitalism and democracy.

"Now something has changed. Marx may have been onto something in thinking that there are interesting tensions between capitalism and democracy. Maybe it's an awkward marriage but not every awkward union ends badly. The aim of our session is to explore changes in thinking and different conceptions of capitalism and democracy," said Professor Cohen, who is head of the Department of Political Science and a professor of philosophy as well.

"My most deeply held political belief is that power corrupts," said Professor Solow. "Therefore, for me, the basic problem of democracy is to avoid undue concentrations of power. Capitalism has going for it that on paper at least it separates economic power from political power. It turns private property into a buffer for the individual against the state.

"But laissez-faire capitalism tends to generate vast inequalities of income and even vaster inequalities of wealth. And there's an endemic tendency in capitalist democracies for the very wealthy to want to buy political power... so we can end up where socialism ends up, only by the back door, with economic power and political power sitting in the same hands," said Professor Solow. This situation suggested to him that "partially regulated capitalism" would be best for democracy, he said.

Professor Arrow explored economic and political scenarios in revolutionary France, in pre-Nazi and Nazi Germany, in the Soviet Union under Stalin, and in China during the Cultural Revolution to tease out features of capitalism or democracy and to suggest roles for each. He enlivened the panel discussion by asking questions such as: "If capitalism is good for democracy, is more capitalism better? Does capitalism in a capitalist democracy ward off threats to that democracy? Is democracy necessary for capitalism to work? If that's so, what about China? Korea? And why does the military itself play a powerful role in places such as Chile and Spain but not elsewhere?"

"It's quite clear that economic growth is helpful in a democracy. It's also clear that capitalism itself doesn't work very well when it's not regulated and when there aren't checks and balances on it. Only a democracy, a powerful democratic state with access to free information by all citizens, can provide those," Professor Arrow concluded.

Professor Berger widened the discussion to the global marketplace.

"The great surprise in human history has been how good democracy has been for capitalism. And the other great surpise has been that even in societies in which capitalism has generated enormous inequalities of property, wages, wealth and opportunities, the majority does not vote to confiscate the riches of the super-rich, nor to flatten income inequalities through the tax system," declared Professor Berger.

But the pressing question of our times is, she said: "What's going to happen to the fit (however surprising) between capitalism and democracy in the context of global capitalism?"

"Democracy and capitalism have been compatible all these years because, until recently, capitalism had been largely contained within national boundaries. Within domestic societies, governments acted to cushion the most disruptive features of capitalism, business cycles, unemployment, inflation, depression, environmental degradation. Globalization means that more of the world's population everywhere becomes more vulnerable to economic forces outside their own country," said Professor Berger.