Future cars to have more power, thanks to MIT work 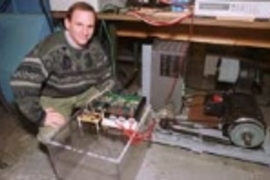 ↓ Download Image
Caption: Research scientist David Perreault kneels next to an alternator that could dramatically increase the power available to future cars. The laboratory-scale apparatus nearest Dr. Perreault contains the new switches that enable this increase; the other part of the alternator is at right.
Credits: Photo / Donna Coveney

Caption:
Research scientist David Perreault kneels next to an alternator that could dramatically increase the power available to future cars. The laboratory-scale apparatus nearest Dr. Perreault contains the new switches that enable this increase; the other part of the alternator is at right.
Credits:
Photo / Donna Coveney

An MIT solution for punching up the electrical power in future cars turns out to be inexpensive to implement and, as a welcome side effect, significantly increases a vehicle's fuel economy.

"On average we get twice as much power from the new technology," said David J. Perreault, the research scientist in the Laboratory for Electromagnetic and Electronic Systems who led the work. And because the technology builds on elements that already exist in a car, it can be integrated fairly easily and cheaply into the manufacturing process.

One of the key challenges associated with building the car of the future is increasing the amount of electrical power available to the vehicle. Nifty features like heated windshields, advanced suspensions and new devices for cutting noxious emissions will require more power than the current 14-volt automobile electrical system can handle. In addition, "higher power will allow many existing features to work better," said Dr. Perreault, who presented a paper on the work October 17 at the Convergence 2000 conference in Detroit.

"It doesn't sound like it would be that difficult to do, but it turns out that there are several subtle technical problems," Dr. Perreault said. The MIT/Industry Consortium on Advanced Automotive Electrical/Electronic Components and Systems, which supports Dr. Perreault's work, "was tasked with finding solutions to these problems."

The work focuses on the alternator, or electrical generator. Dr. Perreault and Vahe Caliskan (PhD 2000) tackled the problem by first modeling the alternator mathematically, then building an alternator based on those models.

"We tried to boil it down to the simplest thing you could do to achieve the desired goal," Dr. Perreault said. "Essentially we replaced three of the passive elements for directing current with three active switches. That gives us more ways to control the current flowing through the system." As a result, he said, "I can use those switches to optimize current flow to get higher power."

He explained that conventional alternators are designed to optimize current flow only at idle. "At every other speed they're very suboptimal." The new technology optimizes current flow at these other operating points, resulting in higher output power and more efficiency.

Because the new system is more efficient, "it also dissipates less energy as heat," Dr. Perreault said. "That means the car burns considerably less gas to get the same amount of power."

The increased control over current flow also solves another major problem associated with a higher-voltage system: large unexpected jumps in voltage due to changes in current. Dr. Perreault explained that in a 14-volt system, the voltage can jump to an undesirable 80 volts when the system is disturbed in certain ways, for example if the battery connector is jiggled during operation. As a result, everything in today's vehicles "is designed to survive at 80 volts," he said.

In the same situation, however, a 42-volt system could spike to 240 volts. Among other drawbacks, that would mean that the car would have to be redesigned to survive the higher jolt. And that, of course, would be expensive.

The new technology solves this problem by allowing much greater control of the voltage. As a result, said Dr. Perreault, "our base voltage of 42 volts can be limited to about 60 volts during such an episode."

The technology also solves yet another problem: jump-starting a 42-volt vehicle with one running on just 14 volts. "People want to come out with 42-volt vehicles, but the passenger cars on the road all have 14-volt batteries," said Dr. Perreault. "If a car has a 42-volt battery, it cannot be directly jump-started from a 14-volt car. In fact, unpleasant things like explosions could happen."

Any alternator, however, stores energy magnetically when it carries current. "Typically this actually hinders performance," Dr. Perreault said. "We're using it here to help us."

The energy storage ability of the alternator coupled with the increased controls of the new system "allow you to take energy from a 14-volt battery and pump it up to the 42-volt battery you're trying to charge," Dr. Perreault said.

The reaction to the work from members of the consortium that funded it "has been very strong and very positive," Dr. Perreault reports. As a result, he said, "I'm very pleased."

Scientist has fun with work

Dave Perreault (SM 1991, PhD 1997) has always liked electronics, maybe because his father is a professor of electrical and computer engineering at Boston University. "So when I came to MIT as a graduate student, I went into what I enjoyed," he said.

One of his present interests is automotive electronics "because that's a place where there's lots of room to make a big impact," said Dr. Perreault, who drives a black Volvo 850 wagon.

The goal of his recent work was to increase the electrical power available to cars. Other advantages of the resulting technology -- like increased fuel efficiency -- weren't obvious at first. "As we worked on the problem, we realized we could do more and more with it," he said. "We attacked it piece by piece. It's been fun!"

A version of this article appeared in MIT Tech Talk on November 1, 2000.