Artists describe how they make stories using words and music 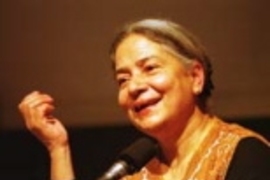 The second School of Hunanities, Arts, and Social Sciences anniversary colloquium, "How do artists tell their stories?" opened with remarks by Ellen T. Harris, Class of 1949 Professor of Music and head of the Music and Theater Arts Section at MIT.

"Fifty years ago at MIT, Berenice Abbott created photographs that told stories about wave force, magnetism and the nature of light. Harold Edgerton depicted stories about motion and impact that had never been told before. The counterpoint of art in technology at MIT tells us that art and design are inextricably linked. Art tells stories about itself, about the world and about our place in it," said Professor Harris.

THE GOODS ON GATSBY

Professor Harbison based his discussion of storytelling in music on his opera The Great Gatsby, which premiered at the Metropolitan Opera House in New York City last January.

Noting that "discussion of music without music is like pornography -- it awakens the appetite without realization of the appetite," Professor Harbision played a "snip of a vast opera, a moment from Act Two of The Great Gatsby, when Daisy and Gatsby have renewed their acquaintance, as a party proceeds around them."

He faced two artistic challenges in this scene, Professor Harbison explained. As a composer, he had to shift from "ambient party music -- old songs that I composed to be historically evocative -- to character-linked music," he said. As a dramatist, Professor Harbison had to provide what's known in Hollywood as "backstory: information about Gatsby, sung by the character, that would serve to give voice to the shadowy rumors about his past, move the plot along and get rid of Nick, who narrates the novel. In opera, the audience has to be in on everything." The task of storytelling is different for a dramatist and a composer, he said. "We composers have to take events in hand. We can't double-back and reparse a line. In the opera house, a line doesn't get another chance. The story has to be told with ruthless plainness.

Professor Harbison noted that there is a "hitch in opera unlike other forms. Gatsby took 200 people to produce, and they each modified the precision of intent of the piece to almost as great a factor as their number."

Professor Desai likened writing to "the activity of a fisherwoman sending line down to the depths. The writer must believe that in that lake there is a fish. Ripples can be seen. Even the cruising fin is there for all to see. But what sets the writer apart is belief in the body of a fish living just below the surface. Writing is a way to explore what lies below," she said.

She contrasted her life in India -- years of reflection and contemplation -- with her more recent experience in the US, when she began to teach to earn a living. This cultural division also structures her recent novel, Fasting Feasting, from which she read the opening scene to a spellbound audience.

Professor Glï¿½ï¿½ck also began her remarks with comments on the craft of storytelling. She likened writing poetry to "a sorting process. The best analogy I can offer is a small child sitting listening to adult conversation in the next room. Poetry is the process of sorting out those voices," she said.

Professor Glï¿½ï¿½ck described her writing life as one that alternated between long periods of drought and a rush of poems so demanding and so sudden that she felt "afraid I must have stolen something, so I send them all out to my friends and ask, 'Is this your line?'" she said.

In response to a question from the New York Times, the panelists spoke briefly on the effect teaching has had on their artistic lives.

Professor Desai said that teaching makes her "more analytical." Professor Glï¿½ï¿½ck remarked, "I love to teach and to attempt to articulate what about a student poem kept it from being memorable." Professor Harbison noted, "We get a kind of volunteer personality in the arts, someone who accepts the idea that you have to do a lot of work to make something. That's an Institute-wide assumption. MIT is a place where the atmosphere is: you make things and you have to do a lot of work."