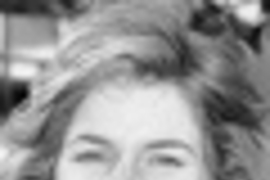 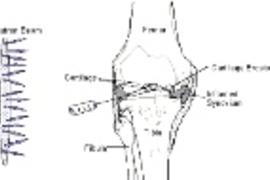 ↓ Download Image
Caption: The researchers inject a boron compound into an arthritic joint and expose the joint to neutrons. The boron captures some of the neutrons to form a radioactive substance that kills the inflamed synovium, represented by the gray spots.
Credits: Image courtesy / INEEL

Caption:
The researchers inject a boron compound into an arthritic joint and expose the joint to neutrons. The boron captures some of the neutrons to form a radioactive substance that kills the inflamed synovium, represented by the gray spots.
Credits:
Image courtesy / INEEL

An injection and a few minutes in a gentle beam of neutrons may some day ease the pain of severe rheumatoid arthritis for thousands of Americans.

Associate Professor Jacquelyn Yanch of the Department of Nuclear Engineering leads work on a new way to kill the synovium, the lining that overgrows and ruins a joint afflicted with rheumatoid arthritis. She is testing the technique on rabbits and hopes to test it on humans in a few years. Her collaborators are from MIT, the Department of Energy's Idaho National Engineering and Environmental Laboratory (INEEL), Brigham and Women's Hospital, and Newton Scientific, Inc.

Professor Yanch injects a boron compound into an arthritic joint and exposes the joint to a beam of subatomic particles called neutrons. The boron absorbs some of the neutrons and forms a radioactive substance that quickly decays. Radiation from the decay kills the synovium and vanishes as soon as the neutron beam is turned off, since boron itself is not radioactive.

The new technique, called boron neutron capture synovectomy, should be more effective than surgery, which often fails to remove all the diseased tissue. It should be safer than an injection of a radioactive material, which kills the synovium but leaves radioactivity in the body.

No one knows what initiates or how to cure rheumatoid arthritis, a potentially crippling disease that afflicts more than two million Americans. The disease arises when the immune system mistakenly targets the synovium, the membrane that surrounds a joint and holds in the lubricating synovial fluid. The synovium grows abnormally and invades cartilage and bone, causing them to soften and crumble.

Drugs can often hold the immune system in check. But even after drug therapy, between 10 and 20 percent of patients continue to suffer in at least one joint. Then, the only way to slow the progress of the disease is to get rid of the synovium.

Professor Yanch and colleagues are trying their technique on the knees of rabbits with induced rheumatoid arthritis. Early results are promising. "We have very clear evidence that we've killed the synovium, which is what you want to do," Professor Yanch said.

But more work must be done before Professor Yanch can test the technique on people. For treatment of nonlethal diseases, the Food and Drug Administration requires experiments on two different animal species before it will approve experiments with humans, said Professor Yanch, who is also director of the Laboratory of Accelerator Beam Applications.

Professor Yanch thought of the technique in 1992, but the technology began to grow only after she received support from INEEL in 1995. "Most of the development has come with funds we've received through the University Research Consortium," she said. "It's been a big help."

Professor Yanch looks forward to the day when the new technology will move out of the lab and into the clinic. She said she has always been fascinated by the interactions of radiation with matter, particularly living tissue, but she also draws satisfaction from knowing her efforts will help others.

"I enjoy the whole area of radiation and medicine on an academic level, but it's also nice to know that what you're doing may some day help someone get through the day with less pain," she said. "It's nice to be able to combine what you love to do with something that will help others."

A version of this article appeared in MIT Tech Talk on January 26, 2000.